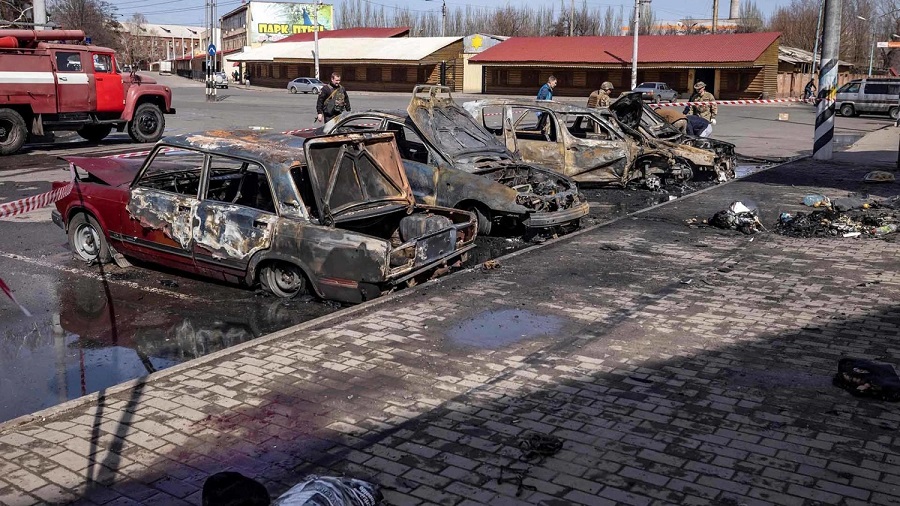 Five of the dead were recovered from a car on the railway track and search and rescue operations are ongoing, Zelensky said in an evening video address.

More than 50 people were injured in the shelling, according to earlier information. It is not possible to independently verify the details.

The attack came on the same day Ukraine marked 31 years of independence and the six-month mark since Russia began its invasion.

“It’s almost night, our main day, Independence Day of Ukraine, is coming to an end. But our independence does not end and will never end,” he said.

Train stations and rail infrastructure have been repeatedly hit during the war. In April, at least 57 died in an attack on the Kramatorsk station in the eastern Donbass region.

Russia attacked neighbouring Ukraine on Feb. 24 but after failing to make advances on the capital Kiev, Moscow pulled back to concentrate on taking the separatist-dominated areas in the east and the south of the country.

The war is not leaving any part of Ukraine untouched. Elsewhere in Dnipropetrovsk, an 11-year-old child was killed by Russian shelling on Wednesday, according to local officials.

On the day Ukrainians celebrate breaking free of the Soviet Union in 1991, Ukrainian authorities reported attacks in several locations across the country, including the Khmelnytskyi region in the west and Zhytomyr region in the north.

While air raid sirens wailed throughout the day in Ukraine, leaders around the world demanded Russia halt the war and reiterated calls for a monitoring mission to be allowed to access a major nuclear plant.

UN Secretary General António Guterres said he had little hope for an early end to the war.

“Despite progress on the humanitarian front, fighting in Ukraine shows no signs of ending – with new potential areas of dangerous escalation appearing,” he told the UN Security Council in New York.

“Today marks a sad and tragic milestone,” he said. “Thousands of civilians have been killed and injured, including hundreds of children.”

He also warned of the potential for catastrophe at the embattled Zaporizhzhya nuclear power plant and urged an expert mission to the site, led by the International Atomic Energy Agency (IAEA).

Russian forces have occupied the Zaporizhzhya plant, the largest nuclear site in Europe, since March, but attacks near the facility have escalated in recent weeks.

Several others echoed these concerns at the UN meeting.

“The past months we have seen an emerging risk of nuclear calamity in Europe.

“It is deplorable that we even need to say that a nuclear power plant should never be used as a military base,” the European Union’s UN ambassador Silvio Gonzato said.

Gonzato called on Moscow to allow an international team of experts onto the site.

An IAEA mission to check on the sprawling plant’s critical safety and control systems is supported in principle by all sides but it has not yet received the final approval from the warring parties amid disagreement over its details, including the route the experts would take.

Zelensky proposed that Russia transfer control of the Zaporizhzhya plant to the IAEA, in his address to the UN Security Council via video link.

Russia must unconditionally cease its “nuclear blackmail” and completely withdraw from the plant in southern Ukraine, he added, as he also stressed the importance of fighting off Russia’s invasion in a global context.

If Russia is not stopped now, Zelensky said, “Russian killers will probably end up in other countries – in Europe, Asia, Africa, Latin America.”

He added: “Russia must be held accountable for the crime of aggression against Ukraine.”

In Washington, U.S. President Joe Biden announced it would provide 2.98 billion dollars of weapons and equipment.

The U.S. has now committed more than 13.5 billion billion in security assistance to Ukraine since Biden took office.