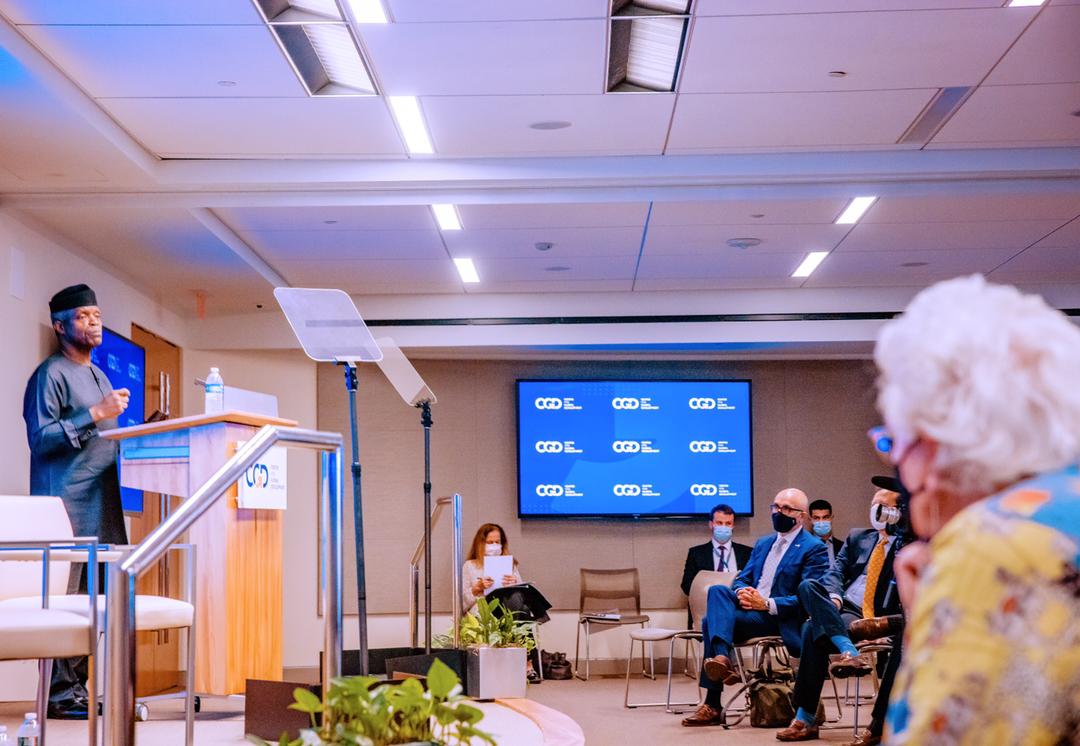 Laolu Akande, Senior Special Assistant to the President on Media and Publicity, Office of the Vice President, disclosed this in a statement on Friday in Abuja.

The vice president delivered a lecture on Thursday explaining the DFC concept on a just and equitable energy transition for Africa at the Center for Global Development in Washington D.C, U.S.

“Debt for climate swaps is a type of debt swap where bilateral or multilateral debt is forgiven by creditors in exchange for a commitment by the debtor to use the outstanding debt service payments for national climate action programmes.

“Typically, the creditor country or institution agrees to forgive part of a debt, if the debtor country would pay the avoided debt service payment in a local currency into an escrow or any other transparent fund and the funds must then be used for agreed climate projects in the debtor country.

“Increase the fiscal space for climate-related investments and reduce the debt burden for participating developing countries.

“For the creditor the swap can be made to count as a component of their Nationally Determined Contributions (NDC).”

According to Osinbajo, there are significant policy actions necessary to make the deal acceptable and sustainable.

The vice president also proposed the greater participation of African countries in the Global Carbon Market while exploring financing options for energy transition.

He said there was a need to take a comprehensive approach in working jointly towards common goals, including the market and environmental opportunities presented by the financing of clean energy assets in growing energy markets.

“In addition to conventional capital flows both from public and private sources, it is also essential that Africa can participate more fully in the global carbon finance market.

Osinbajo encouraged developed countries to support Africa to develop into a global supplier of carbon credits, ranging from bio-diversity to energy-based credits.

The vice president said that the central thinking for most developing countries was the issue of a just transition with two, not one, existential crises, the climate crisis and extreme poverty.

“The clear implication of this reality is that our plans and commitments to carbon neutrality must include clear plans on energy access if we are to confront poverty.

“This includes access to energy for consumptive and productive use and spanning across electricity, heating, cooking, and other end-use sectors.

“Nearly 90 million people in Asia and Africa who had previously gained access to electricity can no longer afford to pay for their basic energy needs; the inflationary pressures caused by the COVID-19 pandemic and other macroeconomic trends have been further exacerbated by the ongoing war in Ukraine.’’

He cautioned that limiting financing of gas projects for domestic use would pose a severe challenge to economic development, delivery of electricity access and clean cooking solutions, and the scale-up and integration of renewable energy into the energy mix.

The vice president said that ETP was designed to tackle the dual crises of energy poverty and climate change and deliver SDG-7 by 2030 and net-zero by 2060 while concentrating on the provision of energy for development, industrialization, and economic growth.

Osinbajo identified some double standards evident in the response to the current energy crisis by many countries in the global North.

“Today excluding South Africa, the remaining one billion people in Sub-Saharan Africa are serviced by an installed capacity of just 81 gigawatts. Sub-Saharan Africa has contributed, based on information that is already out there, less than one per cent of cumulative CO.2 2 emissions.

“The per capita energy capacity in the UK is almost fifteen times than in Sub-Saharan Africa,” he said.

The vice president then took questions around the theme of a just energy transition and the recently launched Nigerian Energy Transition Plan.

Others were Director-General of the National Council on Climate Change, Salisu Dahiru, Nigeria’s Ambassador to the U.S., Uzoma Emenike, Special Representative of the UN Secretary-General for Sustainable Energy for All (SEforALL), Ms Damilola Ogunbiyi.

The Managing Director of Niger Delta Power Holding Company Limited, Chiedu Ugbo and other senior government officials were also at the lecture.