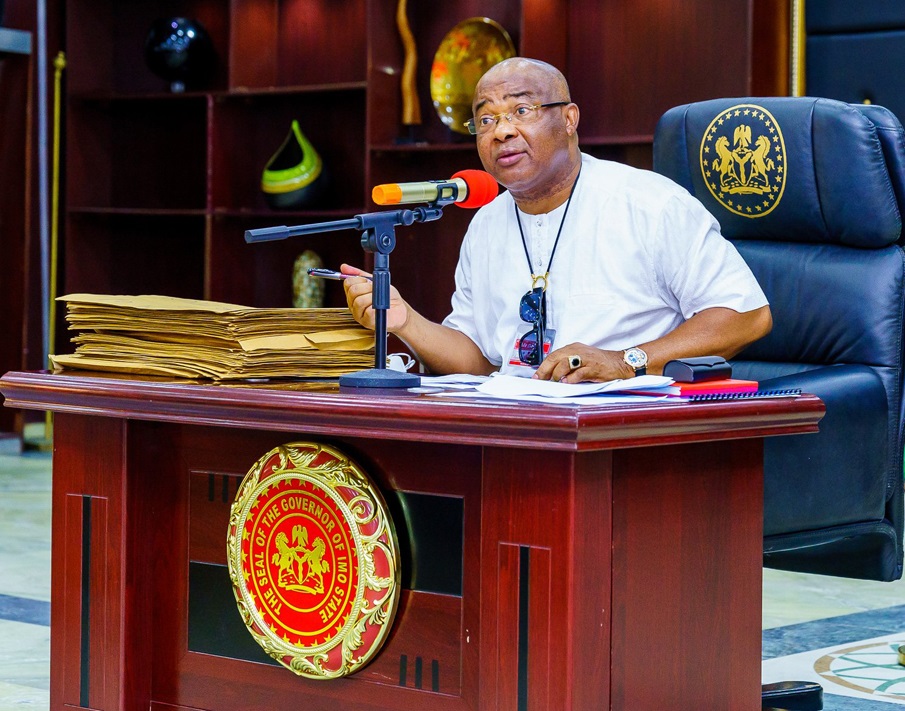 Gov. Hope Uzodimma of Imo has received the report of the Commission of Inquiry into the mayhem which occurred at Izombe, Oguta council area of the state, in October 2021.

It was reported that the incident resulted in the death of no fewer than three persons and the burning of many houses.

Uzodimma, who received the report at the New Exco Chamber, Government House Owerri, on Wednesday, the thanked the Chairman and members of the panel for “doing a thorough job”.

He also thanked them for their diligence in dealing with the situation, especially for painstakingly looking at the various issues at stake.

The governor expressed conviction that the report would help bring to rest, issues of insecurity in the state.

He assured the panel that government would look into their recommendations with a view to applying them appropriately.

“This report will go a long way in assuaging the problems of insecurity in the area in question in particular and Imo in general. It will help calm frayed nerves and tension.

“You have justified the confidence reposed in you, and from time to time, you will be invited to assist government to look into issues that will help bring lasting peace and development in Imo,” the governor said.

The Chairman of the panel, retired Justice Ezeohiri Njemanze, said that the committee began proceedings in February 2022.

He said that the panel received over 350 petitions and reports from petitioners, traditional rulers and presidents-general from the affected communities.

Njemanze said they also received from the Police, the Department of State Services and the Correctional Services.

He expressed disgust over what he described as “the level of heinous crime and criminality perpetrated by people for selfish reasons and purposes, which helped to fuel the mayhem in Izombe and adjoining communities”.

The panel chairman said that the Nigerian Army and the Nigerian Security and Civil Defence Corps did not appear before the committee.

He thanked the governor for finding them worthy of the assignment and proceeded to hand over four volumes of the panel’s report to him.