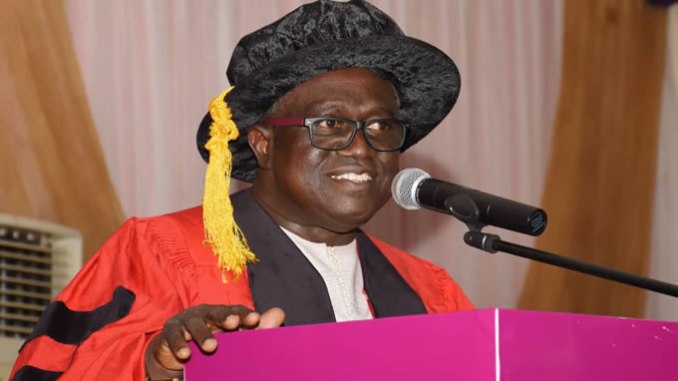 The Sustainable Peace Team, set up by the Committee of Vice Chancellors of Nigerian Universities (CVCNU) has called for an executive action by the Federal Government to propose to the National Assembly its decision on improved funding to address ASUU/FG impasse.

The former Secretary General, CVCNU, Prof. Michael Faborode, made the call in an advisory paper tagged: ‘Exploring Alternative Pathways to Amicably Resolving FG/ASUU Impasse” made available to our reporter on Tuesday in Abuja.

Faborode said that once the national assembly receives the necessary communication from government, should enact legislation to ensure succeeding government’s compliance with the undertaking.

He also suggested that government, as well as ASUU, should consider and accept ‘Blended Financing options as a medium-term solution to sustainable funding of public universities.

“As a way of sourcing and mobilising funds internally to take care of some of the current pressing needs, we propose to government to suspend the 25 per cent remittance of all user charges collected by the universities.

“This will go a long way in helping to pool funds internally to meet some of the outstanding obligations and further boost internal fund generation efforts in universities.

“For the 35% professoriate salary increase offer that was rejected by ASUU, we suggest that a middle ground will be for government to accept to make the offer, net of taxes.

“This will provide a sort of tax break that will improve the current comparatively low take-home pay of Nigerian academics. This can be for a period to be mutually determined, taking cognisance of the deleterious galloping rate of brain drain, that must be halted,” he said.

According to Faborode, this will represent a significant shift by ASUU as it falls far short of what was dedicatedly and painstakingly negotiated.

He said that the team also propose an agreed percentage increase in the quantum of user charges to help bridge funding gaps which he said could be used to fund staff (earned) allowances as currently being done by some state universities.

“We are aware that the Audit Report commissioned by the federal government to review the payment of earned allowances, established that the allowances had no clear-cut basis of disbursement.

“And in many cases, the administrative heads played a secondary role in its disbursement.

“We say time and again that given the unique system that operates in universities, the time lost to a strike can, to an extent, be recovered through extra work and sacrifices (such as utilisation of breaks, periods outside official hours and leaves to make up) on the part of the staff.

He, therefore, called on the government on the needs to allow some creative funding options, while appealing to the government to reconsider its position on this matter.

Faborode said that the team recognised that the Tertiary Education Trust Fund (TETFund) had become, by default, a major financier of higher education.

He, however, said that the current template for funds allocation and distribution was long overdue for review.

He advised that TETFund, NUC, CVC/CPC, ASUU and the ministry of education to convene a policy meeting to consider a new template that would meet the current demands of beneficiary institutions and block fund leakages.

“We also agree with the suggestion that government should increase the current funding source to at least 3% of profit after tax of all companies doing business in Nigeria.

“As we noted in our previous communication, ultimately, the government must align itself politically and legally with the laws establishing its universities. The autonomy of public universities cannot be by half measures.

“The University is a universal entity, and we cannot localise ours out of the global community of institutions of higher learning and expect them to compete favourably with their global peers,” he said.

He added that having established and appointed the Governing Councils, with people of high integrity and proven records of service, they should be allowed to administer the universities as prescribed by the law and in tune with their individual contexts.

According to him, for our universities to transform to the highly desired world class status, they require favourable governance tenets that encourage strategic vision, innovation, and flexibility.

He said this would enable them to make critical transformative decisions and manage resources without being encumbered by bureaucracy.

He, therefore, called on the government to speedily facilitate the reopening of the universities now that campaigns were about to start as this would help insulate the bulk of the students from overt politicisation of their plight.

“We are informed that the meeting will hold on Wednesday, Sept.14. We plead that the meeting should consider the fate of the Nigerian university system and for the ASUU leadership to be more pragmatic and reflective of history.

‘We earlier noted that 2023 would represent 50 years of strikes by the academic staff. There is no gainsaying that members of the university community at their various levels have made huge personal sacrifices for the system.

“We will continue to do so and hope that external actors like government, its agencies and the national assembly, as well as stakeholders will understand and appreciate that the insistence on adequate funding to create better teaching, learning and research environments is not personal, nor trivial but fundamental to the nation’s progress,” he said.