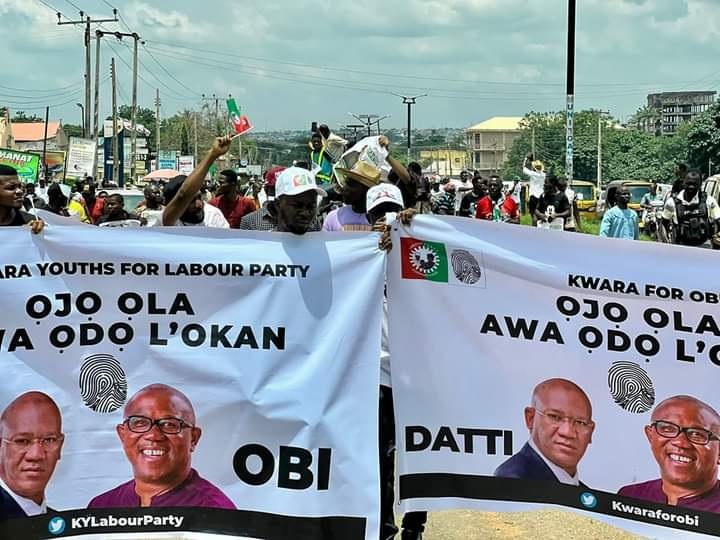 Some youths in llorin on Saturday embarked on a rally supporting the Peter Obi/Ahmed Datti presidential ambition, after an initial hiccup with security operatives.

It was reported that the group, made up mainly of youths, trooped out enmass wuth branded T-shirts and posters of the Presidential Candidate of the Labour Party (LP), Peter Obi, gathered at the Stella Obasanjo Hall, along Ajase-Ipo road in Ilorin.

Some security agents, including officers of the Police, were also noticed in the area in large number engaging the organisers of the rally and some participants.

After a long discussion, the youths were later allowed to march towards Offa-Garage roundabout area.

Speaking with newsmen, Mr Aloysius Nwora, the Kwara Coordinator of the Coalition of Obi Support Groups, said the rally was in solidarity with the political aspiration of Peter Obi, a former governor of Anambra.

“We are having a health walk in solidarity for our principals, Peter Obi and Ahmed Datti.

“The essence of this rally is to counter what is happening in social media or media generally that Obi has no structure.

“We want to clear those saying such that Obi has a structure and we are the structure.

“They said Labour Party has no structure; we agree with them because we are not politicians, but individuals with a passion to make a change in the country through ballot revolution.

On the chances of Obi/Datti in the 2023 General Elections, the coordinator said: “I am not a member of Labour Party, and I can’t speak for them, but I can speak for the movement.

“This movement has covered the whole 16 local government areas in Kwara state alone and same in other states in Nigeria.

“Masses and youths, in particular, are our real structure and you can see it with the level of turnout today,” he said.

On the altercation with the security operatives, he explained that the group sought approval from the police to avert possible hijack of the peaceful rally.

“Just as we all know the country has been hijacked, we fully wrote to the security agencies to inform them about this rally, but unfortunately early this morning we got information that we should not hold the rally.

“We insisted that this is a peaceful rally, not a political campaign and here we are, although, this can serve as a discouragement to some people that have not come here this morning.

“But I believe they would soon be joining us as we are marching on. We have put in every arrangement for this rally and regret the little delay that occurred,” he said.

Also speaking, Mr Omoniyi Idowu, the state Coordinator for Peter Obi Youth Vanguard and Secretary for the Coalition of Peter Obi in Kwara, said “we are only here for solidarity rally because as our slogan, we are Obidiently useful.

“We are not here to disturb the peace of the people in the state.

“The presence of police officers in numbers is just to intimidate us because I was one of the persons that signed the letter submitted to the security agencies to intimate them about this rally today.

“I along with others were with police on Sept. 21 for interrogation, although police boss told us that Kwara state is not ready for campaign, but we told them that what we are doing is not a campaign but solidarity rally for a man we believe in.

“Police boss kept saying Kwara is not ready for campaign, and we kept telling him that it is rally not campaign.

“So, there is no basis for the police officers to be blocking us not to hold support rally for our man,” he said.

Reacting to the development, the Police Public Relations Officer (PPRO), SP Okasanmi Ajayi said “we saw them gathered, they claimed they want to march for Peter Obi of Labour Party.

“Like we all know that it’s not yet time for campaign and we have report that the time is not ripe for this type of rally in Kwara.

“That is why the Commissioner of Police, CP Paul Odama, called their leaders and addressed them but they had already gathered and nothing we can do at this stage again than to guide them and ensure that there is no breakdown of law and order.

“That is why you see a lot of policemen here. I can tell you that so far, they have done their talks and they have been asked to go, because it’s not yet a time for campaign.

“They also said it is not a campaign but solidarity rally, that is why we are preventing them from moving beyond this area.

“Although it’s their right to move but what we are saying is that the security report does not permit such movement to certain areas because we have other groups doing other things along the area they intend to march to, like ‘Post Office and Taiwo.

“It could lead to commotion, and we don’t want to give chance to anything that would lead to breakdown of law and order,” said the PPRO.