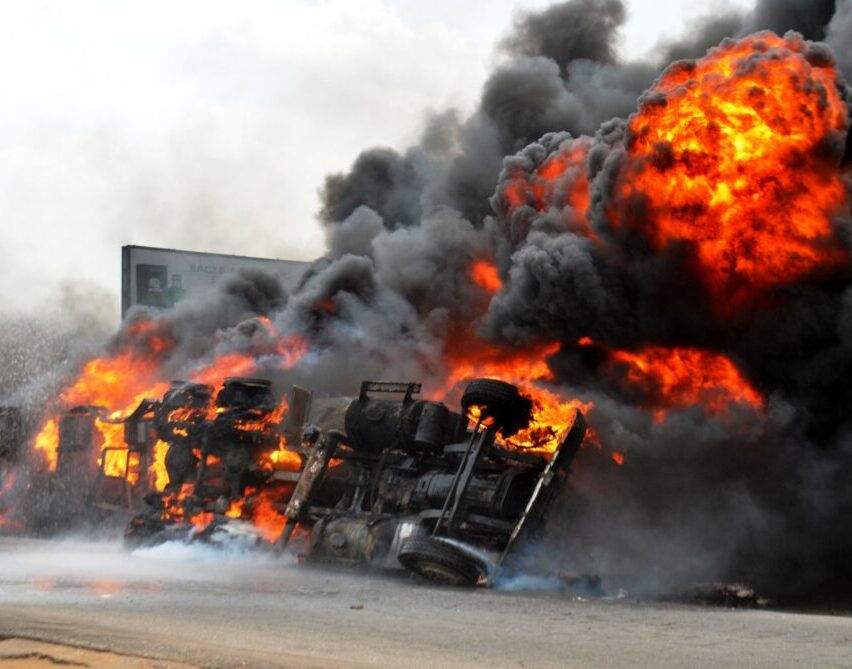 Two persons had been burnt beyond recognition, while three others sustained injuries when a tanker laden with Premium Motor Spirit (PMS or petrol) exploded at Ilo-Awela Junction, at Toll-Gate area on Lagos-Abeokuta Expressway.

Mr Ahmed Umar, the Ogun Sector Commander of Federal Road Safety Corps(FRSC), who confirmed the development to the News Agency of Nigeria (NAN) in Ota, said that the incident happened at about 1.30 a.m. on Thursday.

Umar explained that the tanker laden with PMS was ascending from Ilo-Awela to Toll-Gate area, Lagos-Abeokuta Expressway, when it lost control due to mechanical fault, fell in the process and went into flame.

The sector commander said that a total of 12 vehicles, comprising three luxurious buses, four tricycles, three motorcycles and a yellow bus, were involved in the unfortunate incident.

Umar said that the corpses of the victims had been deposited at State Hospital, Ota, while the survivors, including two males and a female, are also receiving treatment at the same hospital.

He said that the personnel of Fire Service was contacted immediately and the area had been cordoned to prevent any secondary crash.

The sector commander said that the FRSC personnel and other sister agencies were on ground to control traffic gridlock and to ease free flow of traffic in the area.

He advised tanker owners to install safety valves and ensure that their vehicles were in condition before putting them on the road to avert unnecessary mishaps.

Umar commiserated with the familes of those who lost their lives and prayed God to grant them the fortitude to bear the loss.