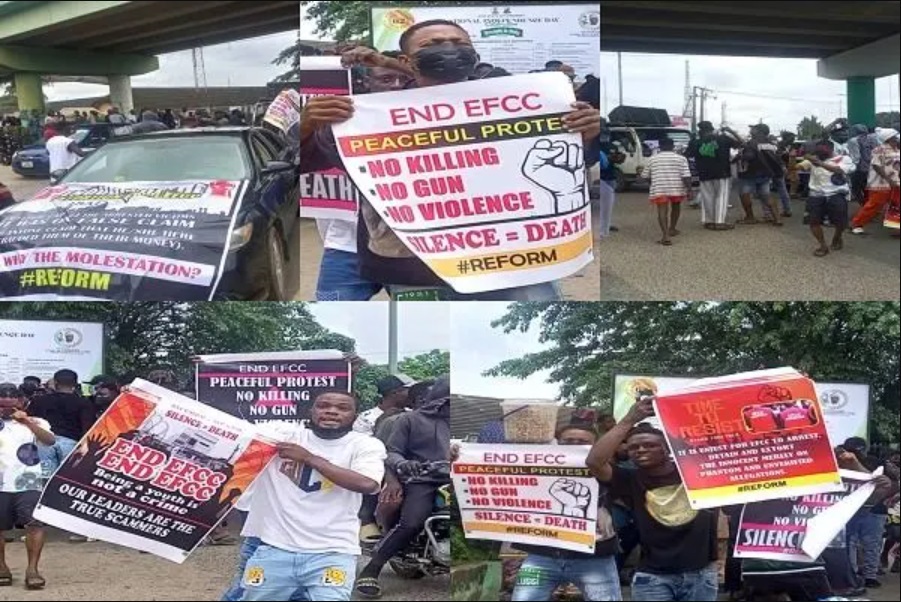 Scores of youths on Thursday in Ibadan, Oyo State capital staged peaceful protest against alleged illegal arrest and detention of innocent youths by the operatives of the Economic and Financial Crimes Commission (EFCC).

The placard-carrying youths besieged the state Secretariat, Agodi, Ibadan, in a convoy of over 20 vehicles, while displaying banners with various inscriptions and chanted solidarity songs to express their displeasure with the conduct of the anti-graft agency.

Some of the placards read: “End EFCC”; “It is unjust for EFCC to arrest innocent merely on phantom and unverified allegation” and “EFCC leave us alone”.

Our correspondent reports that the protesting youths, in their 20s and 30s, barricaded entrance to the Secretariat, making visitors and others stranded for several hours.

It was reported that the protest led to heavy traffic gridlock along Bodija, Parliament Road and Total Garden Roads, among other areas in the axis.

The protesters alleged that the operatives of the agency had virtually turned themselves into “vendetta mafia” and assaulting on innocent youths.

While calling for review and reform of the agency’s activities, the youths accused EFCC of carrying out illegal house search and arrests in their operations.

The spokesperson of the protesters, Olamide Ayobami, said: “We are tired of indiscriminate arrest and detention by EFCC officers.

“The operatives are in the habit of entering our homes without warrant of arrest to intimidate us, accusing us of internet fraud and forcefully detained us over mere allegations.

“We have our legitimate livelihoods and these officers do arrest us because we are living fine.

“We want government to intervene and prevail on EFCC to stop haraassing us.”

Also, a protester, who simply identified himself as Samuel, an Engineer and Realtor, said that on many occasions the operatives of the agency pounced on him, accusing him of being into fraud.

“We are not asking them not to do their job, but they should do it in accordance with the dictate of the law.

“They burst people, collect their phones and search it through. What kind of thing is that?” he said.

Another protester, who spoke on condition of anonymity, said that they were expressing their grievances agitating against indiscriminate arrest by the EFCC, who many times accused them of being fraudsters.

However, Mr Sunday Odukoya, the Executive Assistant to Gov. Seyi Makinde on Security, declined comment on the youths’ protest.