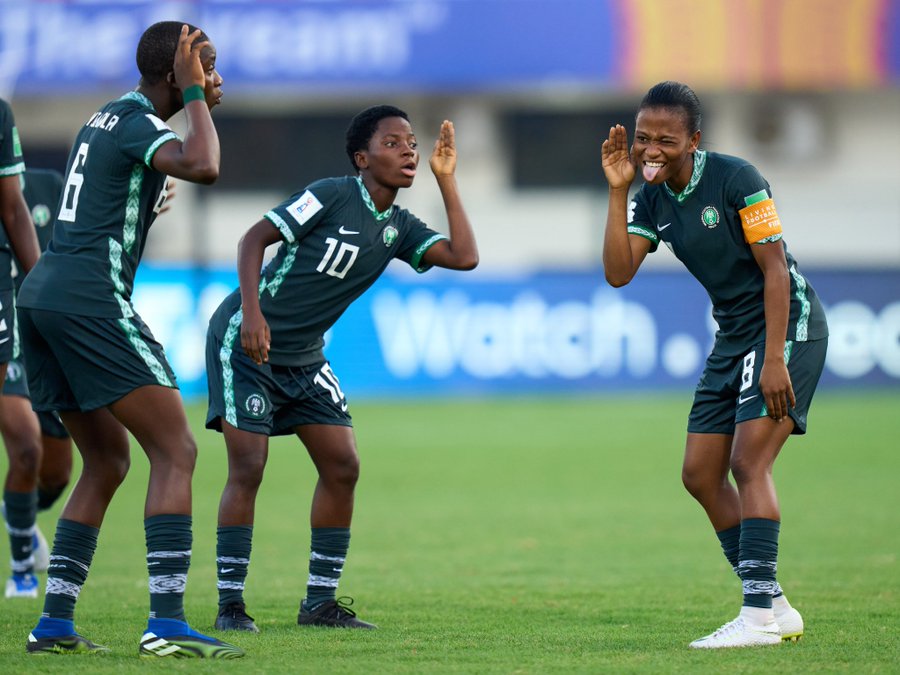 The Flamingos on Monday defeated their Chilean counterparts 2-1 to advance to the quarter-finals of the ongoing 2022 FIFA Under-17 Women’s World Cup in India.

It was reported that in their third and final match of the competition’s group stage match at the Kalinga Stadium in Bhubaneswar, the Nigerian side started brightly.

The Nigerian under-17 women national football side opened scoring through Blessing Emmanuel in the fourth minute.

Bisola Mosaku’s strike off a free-kick by Miracle Usani with eight minutes left was enough to see Nigeria through, in spite of a late penalty kick converted by Roverner Tali.

As was the case against New Zealand on Friday, the Flamingos created a slew of goalscoring opportunities which were not converted.

The win earned the Flamingoes a place in the quarter finals on Friday, where they will face either the U.S or Brazil.

Speaking later, team’s Head Coach Bankole Olowookere assured that his team would get even better as the tournament progresses.

“We missed a number of chances again, but I like the spirit of the team and we will get better as we go on in the competition

“I am happy we made it into the last eight, and that we sustained our winning mentality in spite of the fact that we only needed a draw to sail through,” the coach said.

It was reported that Germany beat New Zealand 3-1 in the other match of Group B at Pandit Jawaharlal Nehru Stadium to emerge group winners.

Germany finished with the maximum nine points in the group phase, having scored a total of 11 goals and conceding only two.

Nigeria finished second with six points, and a plus six goals advantage after scoring seven goals and conceding three.

Chile finished with three points while New Zealand ended up with zero points.

It was reported that the Nigerian team lost 1-2 in their first match against Germany, while they beat New Zealand 4-0 in their second match