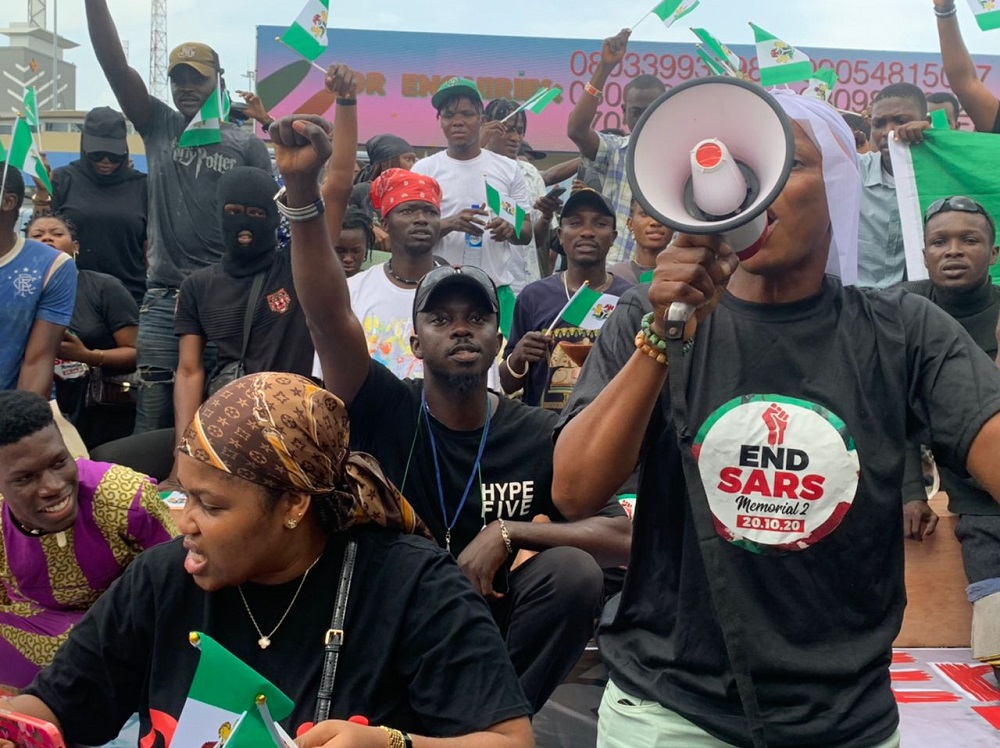 Some Celebrities and organisers of the 2020 EndSARS protest have marked its anniversary with a peaceful procession through the Lekki Toll Gate on Thursday in Lagos.

Our correspondent reports that some Nigerians protested against the Special Anti-Robbery Squad (SARS) of the Nigeria Police, now disbanded, over alleged human rights abuses and other allegations.

The protesters were allegedly attacked by security agents at the Lekki Toll Gate in Lagos, where some persons were reportedly killed.

It was reported that the participants in procession walked from Ajah end of the road across the Lekki Toll Gate towards the Lekki end of the state.

It was observed that while some of the participants walked, some drove in their cars waving the Nigerian Flag, blasting their car horns, singing, while some carried caskets.

Operatives of the Nigeria Police, the Directorate of State Security (DSS) and some other paramilitary services were seen armed at the toll gate to maintain peace.

A Nigerian Musician and songwriter,, Folarin Falana (AKA Falz), told journalists during the procession that the event was to commemorate the alleged death of citizens, particularly youths who were allegedly killed at the Lekki Tollgate on Oct. 20, 2020.

“We have to continue to come up with justice and continue to honour the ones that paid with their lives for us.

“We just came through this Lekki Toll Gate in their memory. We were waving our flags as we passed, some people are carrying caskets. It is very symbolic, those coffins have meanings in them.

“After the walk, we all go back home. We are not out to cause trouble, we tried as much as possible not to even cause traffic gridlock.”

On the 2023 general elections, Falana called on the youths to focus on the elections with a view to ushering in a new set of leaders that would move Nigeria to a better level.

Another celebrity, a Nollywood Actor, Adebowale Adedayo (AKA Macaroni), urged the federal and state governments to do more to improve the lives of the Nigerian youths.

Adedayo noted that the youths have been consistent in the struggle for a better Nigeria, stressing that they have been peaceful in their conducts during the procession.

“So, at the end of the day, if Nigeria is good for all, we will have a peaceful country. That is all we want,” he said.

The Nigerian Influencer and entrepreneur, Feyikemi Abudu, also called on the youths to take the next elections seriously by ensuring they obtained their PVCs with a view to voting leaders of their choices.