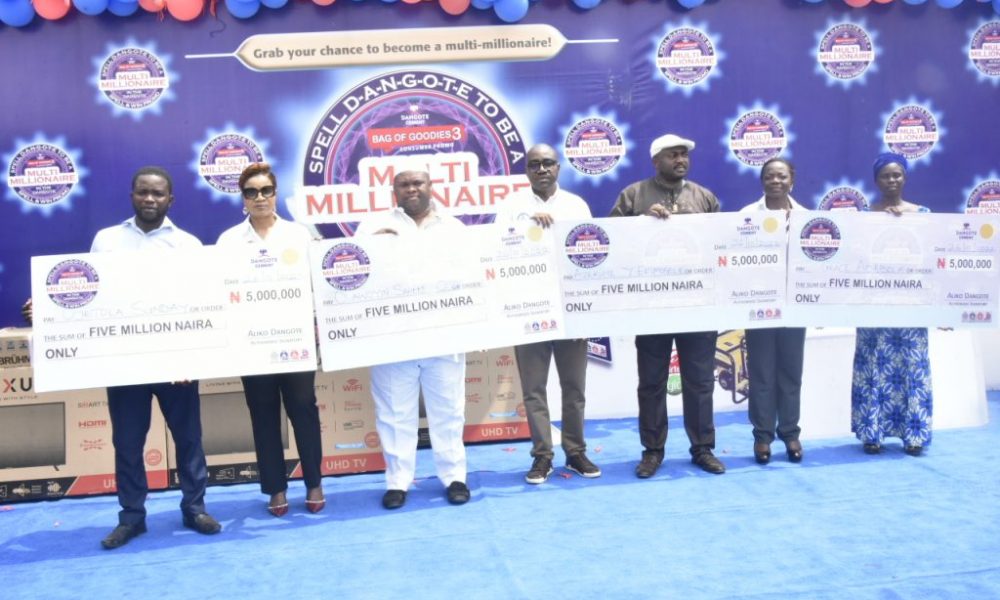 More than 100 customers became instant millionaires across the country on Wednesday in the ongoing Dangote Cement Plc Bag of Goodies Consumer Promo Season 3.

The company disclosed this in a statement by Mr Anthony Chiejina, Group Chief Branding and Communication Officer, Dangote Industry Ltd on Thursday in Lagos.

It added that hundreds of customers were also presented with consolation prizes such as recharge cards, generator sets, freezers, refrigerators, fans, air-conditioners, among many others.

It noted that while the new millionaire costumers jubilated over their good fortune, there were still better days ahead for other Nigerians, as the promo would close on Oct. 31.

National Sales Director, Dangote Cement, Mrs Funmi Sanni, said the promotion was to encourage the customers to continue patronising the product, which according to her, is the best in the country, in terms of quality and product accessibility.

She stated that the company valued the consumers who were the end-users of the products.

“We are here to make more of our customers instant millionaires.

“This is part of our Corporate Social Responsibilities (CSR) in empowering our customers and helping them to build their businesses.

“The promo was conceived as a way to thank them for their support and patronage.

“If you, our customers, refused to buy our products, we wont have a choice than to close shops, but because you have been supporting our operations on a consistent basis, we are still in business, and it is only normal for us to also give back to you.

“The N1billion that was set aside for this Promo will go round our customers and at the end of this Season 3 Promo, hundreds of our customers will be millionaires and multi-millionaires,” she said.

Chinese Yuan strengthens to 7.1570 against dollar