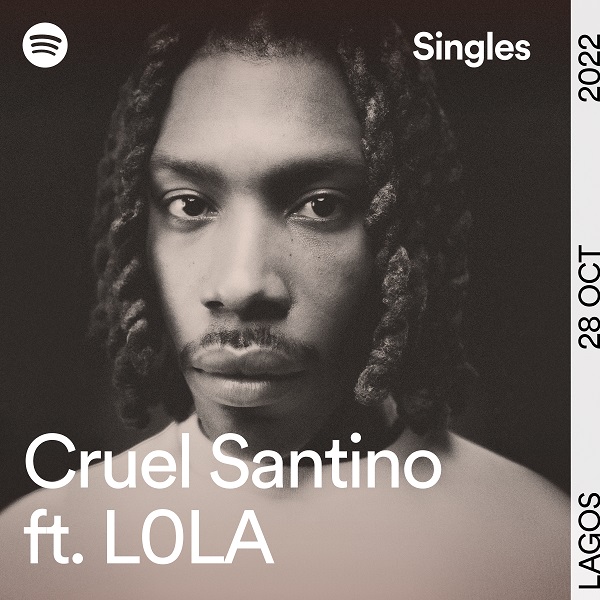 Phiona Okumu, Spotify’s Head of Music, Sub-Saharan Africa, in a statement on Friday, said that this was to celebrate the legacy of Nigeria’s rich music history.

Okumu noted that Spotify was unveiling reimagined renditions of what many consider modern-day Nigerian classics, performed by selected artistes.

According to her, Cruel Santino joined the RADAR Africa 22 Alumnus alongside Victony, who covered “Dami Duro” by Davido.

“Cruel Santino is putting his indie-pop spin on a Nigerian rap classic, as part of the first Nigeria-focused Spotify Singles run.

Okumu said that the artiste first came on the scene with a duo of early mixtapes, building a cult, following with tracks like “Gangsta Fear”.

She said that his critically acclaimed debut, “Mandy and The Jungle”, was released in 2019, with tracks like “Sparky”, “Freaky” and “Rapid Fire”.

She said that the artiste had also built a reputation for edgy visuals, inspired by anime, the occult and Nollywood films.

“Following a three-year hiatus, he returned in 2022 with the 21-track conceptual album, “Subaru Boys:Final Heaven”.

“Cruel Santino’s constantly evolving music is a genre in itself – drawing from his love of Pop-Indie, Alternative, Rap, Dancehall and Afropop.

“And, for his Spotify Single, he applies this worldly twist to a smooth hip-hop collaboration that cuts across decades,” she said.

Okumu explained that “Omoge Wa Jo” was originally released in 2006, a classic track by Sinzu, who is most known for pushing Rap farther into the Nigerian mainstream with hit tracks like Edondeymadt” and “Under G”.

She said the track also featured legendary Nigerian singer, Mike Okri, who was most famous for his 1989 hit, “Time na Money”.

Speaking about his approach to the cover, Cruel Santino said: “The difference between the original Omoge Wa Jo and mine is that Sinzu’s version is more laid back and chill.

“Mine is just freeform sprinkled with Santi madness.

“My favourite part of the original song is the whole song! I spent like two weeks cracking my head on it.

“When people listen to my version, I want them to be happy that those times were here, but sad that they might never get them back again”.