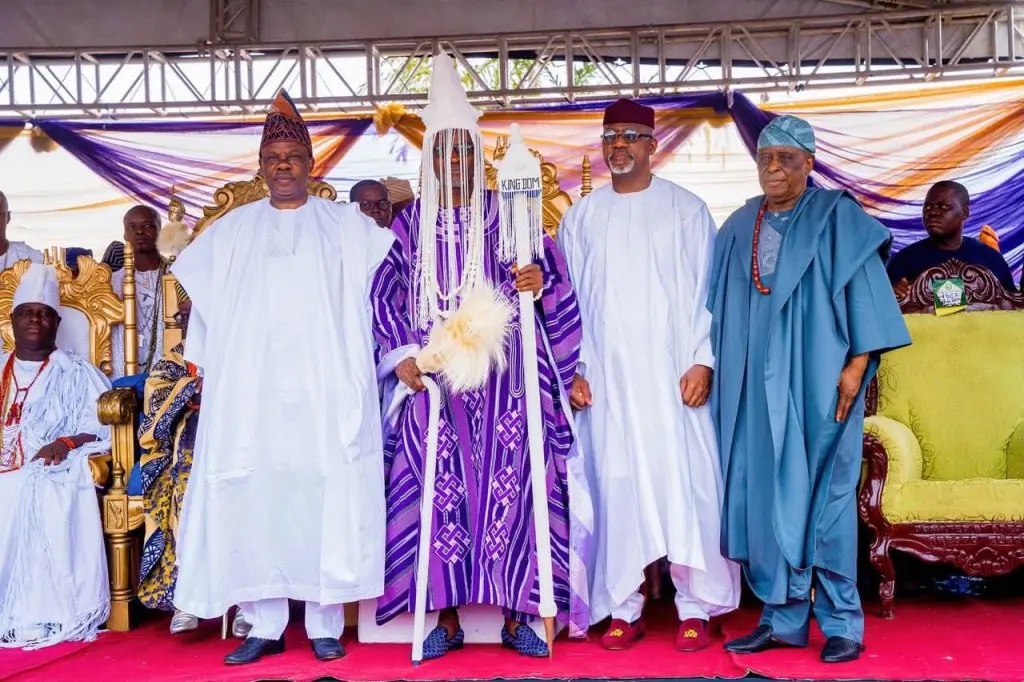 Gov. Dapo Abiodun of Ogun has said that the appointment of the14th Olowu of Owu kingdom complied with the Obas and Chiefs Law, 2021 and the customs and traditions of Owuland

Abiodun made the assertion at the presentation of the staff of office to Oba (Prof) Saka Matemilola, Oluyalo Otileta VII.in Totoro area of Abeokuta on Saturday.

The governor urged the people of Owu Kingdom to rally round and co-operate with the new traditional ruler so that Owu Kingdom could continue on its path of progress and development.

Abiodun, who expressed confidence in the ability of Matemilola to steer the ship of Owu Kingdom to greater heights, urged him to consider his appointment as a call to service.

“I am confident that you will concentrate on the task of accelerating the pace of socio-economic development in Owu Kingdom and Egbaland by mobilising your people in such a manner that their efforts will complement the initiatives of our administration.

“I believe that your vision for Owu Kingdom is aligned to ours as we continue to ensure focused and qualitative governance and to create the enabling environment for a public private sector partnership.

“We consider such partnership as fundamental to the creation of an enduring economic development and individual prosperity of the people of Ogun,” he said.

He expressed appreciation for the support that his administration had continued to receive from the people since he assumed office as governor of Ogun.

“We appreciate those who out of genuine desire for the economic growth and their people have offered plausible policy options, encouragement and candid advice to us like the Balogun Owu, Chief Olusegun Obasanjo.

“He has been with us through thick and thin,” Abiodun said.

Speaking after his installment, Matemilola commended the leadership of the Otileta dynasty for carrying out a credible and fair selection process in spite of many challenges.

He acknowledged the “uniqueness” of the stool of the Olowu of Owu kingdom and its responsibilities.

“As I step into my new role as Olowu, U will be following in a long line of remarkable Olowus who have all made lasting impacts on Owu kingdom,” he said.

The new Olowu, who acknowledged the immense expectations of his subjects, promised that with their support and help of God, he would move the kingdom to greater heights.

“We have already mapped out an ambitious agenda designed to usher in unity, peace, prosperity and pride in Owu people.

“We also have a clear strategy on how we intend to go about them,” he said.

It was reported that the throne of Owu kingdom became vacant on Dec. 12, 2021 following the death of the immediate traditional ruler, late Oba Adegboyega Dosumu who ascended the throne in 2005.

It was reported that Obasanjo, the Balogun of Owu, who unavoidably absent at the ceremony, was represented by his wife, Bola Obasanjo.

Among dignitaries at the ceremony were two former governors of the state, Chief Olusegun Osoba and Sen. Ibikunle Amosun, and former governor of Delta state, Dr Emmanuel Uduaghan.

Others were traditional rulers, captains of industry and politicians including the Ooni of Ife, Oba Adeyeye Ogunwusi, the Alake and Paramount Ruler of Egbaland, Oba Aremu Gbadebo, the Akarigbo of Remo, Oba Babatunde Ajayi, as well as the Olu of Warri, Emiko Ogiame, Atuwatse lll.