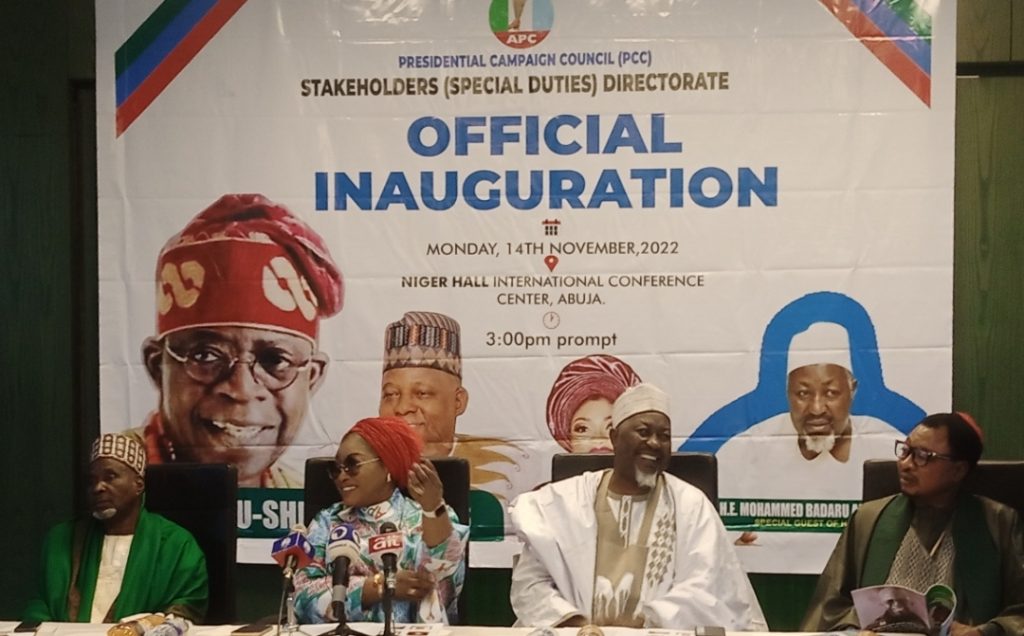 Gov Muhammadu Badaru of Jigawa and Senator Grace Bent have pledged to deliver about 20 million votes during 2023 General Elections to the APC Presidential Candidate, Asiwaju Bola Tinubu and his running mate, Kashim Shettima.

They made the commitment during the inauguration of Stakeholders Special Duties Directorate of the Presidential Campaign Council of the APC on Monday in Abuja.

Badaru expressed confidence that APC remained the best party for the progress and development of the country.

“I have no doubt that the directorate has the capacity to deliver 20 million votes in favour of the APC in the 2023 Presidential Election. I am very positive and certain that we shall win.”

Badaru advised Nigerians to ignore the religious sentiment in some quarters regarding the same faith candidature of the party, adding that progressives look beyond religion sentiment.

The Jigawa governor explained that Tinubu had impacted on individuals, groups and states, and expressed the belief that he would improve the lives of all Nigerians.

Meanwhile, the Coordinator of the Directorate, Sen. Grace Bent, said the major focus of the Directorate was to manage and resolve the public religious outcry against APC’s 2023 same -faith Presidential ticket. “And to also buy back the affection and votes of the estimated 20 million stakeholders and some Nigerians upset with the candidature.

“Tinubu is a good man. He has done so well for missionary schools in Lagos, he raised men regardless of religious background. He is a righteous man who has the fear of God in his heart.

“He is the only person that Nigeria needs now. Tinubu/Shettima will make our country the envy of other countries,” Bent said.

Other leaders of the Campaign Council include Apostle Biodun Sanyaolu as Deputy Coordinator, Pastor Timothy Ademola as Secretary and Ibrahim Bunu as Deputy Secretary.

The directorate comprises religious leaders from Christian and Islamic faith.

It was reported that action plans of the Directorate include internal and organisational capacity building, private engagements with religious bodies/leaders and profound town-hall engagements with aggrieved religious stakeholders.

High points of the event were goodwill messages from religious leaders from the Christian and Islamic faiths, urging Nigerians to avoid sentiments capable of bringing disunity in the country.