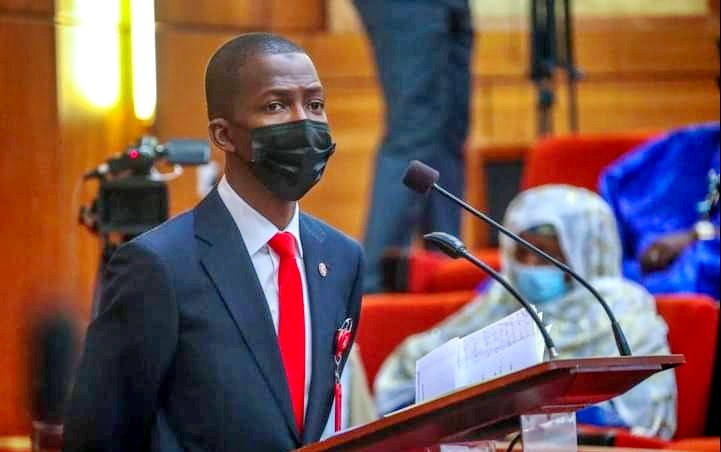 An oil firm Nadabo Energy Ltd, has asked a judge of an Ikeja High Court, Justice Christopher Balogun, to recuse himself from further presiding over a suit with case number ID/118C/2012, for allegedly meeting with Mr Abdulrasheed Bawa,the Chairman of the Economic and Financial Crimes Commission (EFCC).

The allegations of bias were made in an affidavit in support of a Motion on Notice sworn by Abubakar Peters, the Managing Director, Nadabo Energy Ltd and a defendant in the suit which was made available to our correspondent on Thursday.

According to the affidavit, Bawa on March 31, minutes after giving evidence before the court had allegedly held a meeting with Balogun the presiding judge in the office of Justice Kazeem Alogba, the Chief Judge of Lagos State.

Peters in the affidavit noted that several online publications including ThisDay Newspaper widely reported the meeting and the EFCC, through their official Facebook page did not deny the meeting but rather described it as a “routine and courtesy visit”.

He said that the outrage that generated over the meeting has cast doubt on the expected neutrality of Balogun to be an unbiased umpire in adjudicating the case.

According to Peters, Bawa was a Principal Superintendent of the EFCC, when he investigated the N1.4billion subsidy fraud allegations against him and as a result of his investigations, Bawa now elevated to the post of Chairman of the anti-graft agency is the star witness in the case.

According to the affidavit:”At the conclusion of his evidence-in-chief, the cross-examination by the defence counsel commenced immediately on the Dec. 20, 2021. He subsequently testified under cross examination on Jan. 25, March 31 and May 18.

“After the court proceedings of the March 31, 2022, I did not immediately leave the High Court premises at Ikeja, Lagos State.

“On my way to the car park within the premises of the court , few minutes after case number ID/118C/2012, wherein I’ am standing trial was adjourned to 17 and 18 May, 2022, I saw the trial judge, Hon. Justice C. A. Balogun exiting the office of the Chief Judge of the High Court of Lagos State.

“Few days after March 31, 2022, I read it in the news media of the visit of Abdulrasheed Bawa to the office of the Chief Judge of the Lagos High Court with a Registrar from the chambers of the trial judge (Balogun) just immediately after he had testified under cross-examination as PW5 on March 31, 2022.”

Responding, the EFCC in a counter-affidavit deposed to by Mr Samuel Daji, a Legal Officer which was made available to our correspondent, denied the allegations of bias.

The anti-graft agency denied Bawa visited and held a meeting with the trial judge.

The EFCC, however, admitted that its Executive Chairman had a meeting with the Chief Judge of Lagos State on the said day.

“Visit of the Executive Chairman of the EFCC to the Justice Kazeem Alogba, the Chief Judge of Lagos State on March 31, was a routine scheduled courtesy visit which is a normal practice amongst heads of government institutions.

“There is no fact to show that Hon. Justice Balogun was at the meeting between the Justice of Lagos State, Justice Kazeem Alogba and the Executive Chairman of EFCC, Mr. Abdulrasheed Bawa on the said day,” the EFCC said.

It was reported that Peters and his firm, NADABO Energy Ltd are being tried by the EFCC on a 27-count charge bordering on using forged documents to obtain N1.4billiom from the Federal Government as oil subsidy.

The trial began on Dec. 10, 2012, and the EFCC has so far called five prosecution witnesses.

The case has been adjourned until Nov. 30 for continuation of trial.