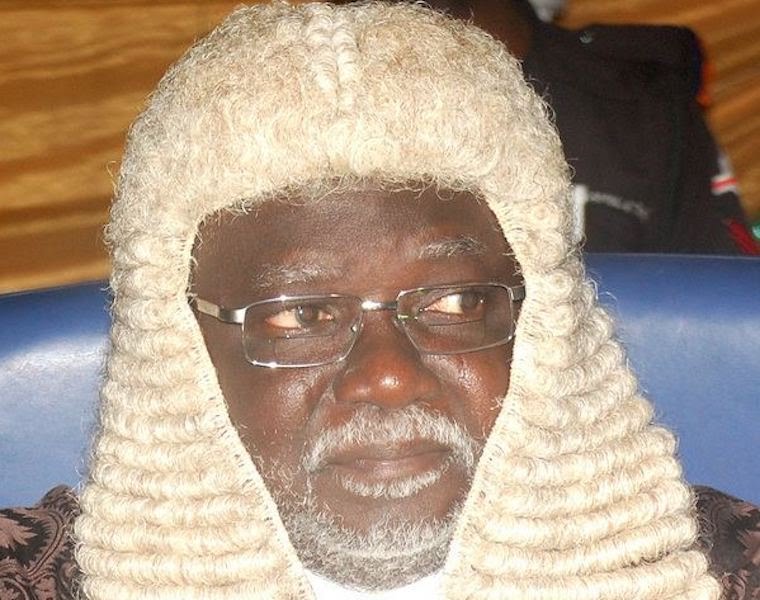 The Chief Justice of Nigeria (CJN), Justice Olukayode Ariwoola says Nigerians, especially the political class are the most litigious people on earth putting the judiciary under a lot of pressure.

Justice Ariwoola made the assertion on Monday in Abuja at the special session of the Supreme Court held to mark the begining of the 2022/2023 legal year and the swearing-in of 62 newly conferred Senior Advocates of Nigeria, (SAN).

According to the CJN, in every little disagreement, we rush to court and in every lost case, we rush to appeal even up to the Supreme Court, no matter how little the issue might be.

“That has obviously accounted for the several appeals pending in Supreme Court.

“Though we receive scathing criticisms from members of the public over our over-blotted docket, we are neither in any position to regulate case inflow to the court nor have the supernatural powers to attend to all in one-fell-swoop.

“We have said it repeatedly that ordinarily, most appeals should be allowed to end at the Court of Appeal, but such constitutional provision is yet to be enacted so we have no blame in it.”

He said it was expedient for an amendment of the constitution to stop interlocutory appeals from coming to the Supreme Court and that such appeals should end at the Court of Appeal.

He explained that Nigeria had various alternative dispute resolution mechanisms across the country that could conveniently be leveraged on, with a view to freeing the courts of the incessant case-overload.

The CJN said that during the 2021/2022 legal year alone, the apex court entertained a total of 1,764 cases, comprising of motions and appeals.

Out of the figure, he said the justices of the court heard 816 Civil, 370 Criminal and 16 Political matters, making a total of 1,202 motions.

He further said, the court considered a total number of 562 appeals, comprising of 341 Civil, 186 Criminal, and 35 Political. A total number of 154 judgments were delivered in the year.

“On the other hand, we have 751 moribund appeals for disposal. That brings the total number of pending (backlog) appeals in this court to 6,884.

“Out of the 4,741 appeals in the court’s docket, 1,495 have briefs filed and exchanged and are ready for hearing; whereas, the remaining 3,246 appeals are having about 10,000 motions, with some contentious and others innocuous in nature.

“As for the pending 1,392 Criminal Appeals, 461 already had briefs filed and exchanged and are ready for hearing. The remaining 931 appeals have about 2,000 different motions for hearing to determine their eligibility for hearing.

“However, the identified 751 moribund appeals are to be disposed of for non-compliance with the Supreme Court Rules, i.e. Order 8 Rule 8”, he said.

“Available facts on judicial activities in various jurisdictions across the globe still emphatically confirmed that the Supreme Court of Nigeria remains the busiest and most hardworking Supreme Court in the world.

“It is on record that we work from Monday to Friday every week. We conduct sittings on daily basis. It is only on Wednesdays that we do Chamber sitting to consider non-contentious matters. On Fridays, we deliver judgments and rulings.

“I We are humans and equally have blood running through our veins; if no one praises us, we have the inalienable right and obligation to praise and eulogise ourselves,” the CJN said.

The CJN reiterated that contrary to speculation from some quarters, the Nigerian judiciary, particularly the Supreme Court, has strived to remain independent and withstand external influence.

“The Nigerian Judiciary, to a very large extent, is independent in conducting its affairs and taking decisions on matters before it without any extraneous influence.

“At the Supreme Court, without mincing words, we are completely independent in the way and manner we conduct our affairs, especially in our judgments.

“We don’t pander to the whims and caprices of anybody. If there is anybody to be feared, I must say with full confidence, that it is only the Almighty God. We will never be subservient to anyone, no matter his position or influence in the society.”

He, however, expressed concerns that with regards to financing, the Nigerian judiciary could not be said to be completely independent.

“Nevertheless, I will make it clear to whoever that cares to listen that when the Nigerian Judiciary is assessed from the financial aspect, we are yet to be free or truly independent.

“The annual budget of the Judiciary is still a far cry from what it ought to be. The figure is either stagnated for a long period of time or it goes on a progressive decline when placed side-by-side with the current realities in the market.

“Prices of goods and services are not getting less or friendly to buyers; while at the same time, our purchasing power is abysmally low and weak enough to transmit on the same wavelength with the market forces.

For his part, the Attorney-General of the Federation and Minister of Justice Minister of Justice, Mr Abubakar Malami, (SAN), said he was optimistic that the recent approval for the increase in the salaries and allowances of judges would boost their moral.

“I like to place on record that since inception, this administration, in line with its commitment to promoting the rule of law, has accorded top priority to the funding of the judiciary.

“As a result, we have ensured a progressive budgetary allocation to the judiciary which has seen an increase from N73 billion in 2015 to over N130 billion in 2022 and a further increase of N150 billion has been proposed for 2023.

“In addition to the foregoing, we have provided special intervention when the need arises, particularly, in meeting the huge cost of running election tribunals”,Malami said.

He said the collective efforts of the judiciary was needed to attain desired levels of good governance and development.

“Since law and development are interwoven, then positive changes in the judiciary will by necessary implication serve as precipitating factors for the much-needed developments in our national polity.

“We continue to solicit the support and cooperation of the judiciary in this regard,” he said.

Also speaking at the event, the Chairman, Body of Benchers, Mr Wole Olanipekun (SAN) corroborated what the CJN said adding that it would be a relief if some political cases do not end up in court.

It was reported that dignitaries including the governors of Kogi, Ondo, Gombe and Plateau as well as some minister attending the event.

Petition against revenue boss: Minna Court remands 2 for forgery, others