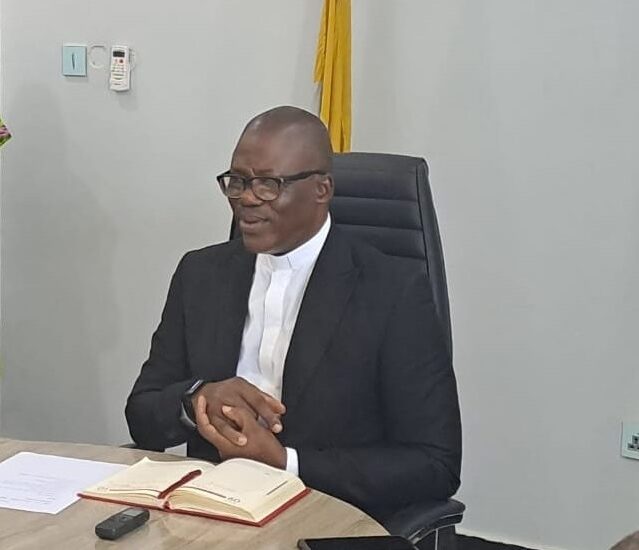 Veritas University, Bwari Abuja says it will be graduating 455 students from both undergraduate and school of Post Graduate studies at its 11th Convocation ceremony on Saturday, Dec. 3.

The Vice-Chancellor of the school, Prof. Hyacinth Ichoku disclosed this to newsmen on Wednesday in Abuja during a pre-convocation press briefing to herald the school’s upcoming event.

He said that 58 students from the School of Post Graduate Studies across various fields of studies, ranging from education, social sciences, humanities and others, would also be graduating.

According to him, the school is proud to consistently graduate its students promptly, in spite of unforeseen economic challenges, “a privilege the students have enjoyed, but not without firm training’’.

“The students have earned their success through hard work, discipline, character and learning.

“If you are good at learning but found wanting in character, you may not graduate. This is because we groom students intellectually, morally, ethically and spiritually, a complete and rounded learning.

“At the end, we are proud to send them out as agents of change to the society to make impactful contributions.”

The vice chancellor said that the school had recently made significant growth with over 1, 600 new intakes to be matriculated on Dec. 10, into various courses of the school.

He said Veritas had a mission to lead the vision of its founding fathers, adding that it was not just about excellence but to become a university that upholds the global standard of catholic universities all over.

He said that the school had improved on its curriculum by adding more programmes based on parent’s demands, which included faculties of pharmacy, health sciences, nursing, laboratory science and software engineering.

Ichoko said that the school had been granted the faculty of Congregation for Catholic Education in the Vatican City, to run pontifical degrees in theology and philosophy programes.

He said that was in addition to National Universities Commission (NUC) approved programmes in theology and philosophy in the school.

“What it means for us as a catholic university is that this is the height of our development because only two catholic schools have that approval in the whole of Africa, the other is at Nairobi, Kenya.

“It is an exceptional privilege for us, and we hope to develop in that direction.”

He reiterated that the school’s commitment was to deliver the best graduates in all fields of study, adding that the school would for the first time, confirm three honorary degrees to three eminent Nigerians for their distinguish contributions to the society on Saturday.

He said Mr Joseph Arumemi-Ikhide, Cardinal John Onaiyekan, Archbishop of Abuja and Archbishop Ignatius Kaigama as recipients of the degrees at the event.

It was reported that the meeting had in attendance various heads of departments and senior Archbishop Ignatius Ayau Kaigama lecturers of the school.