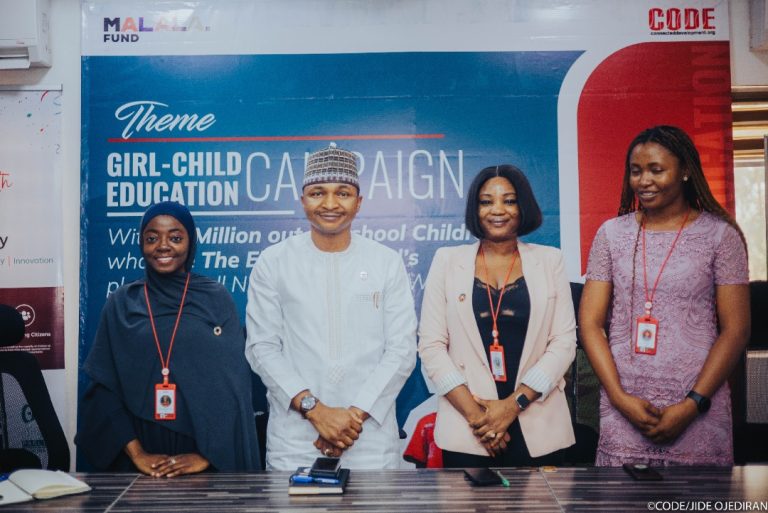 Mr Hamzat Lawal, Chief Executive, CODE, made the call at a news briefing to inaugurate the Girl-Child Education Campaign on Monday in Abuja.

According to Lawal, over the years , CODE observed low political will and commitment by state actors to provide gender-responsive education policies, programmes and budgeting.

He said that the 2023 elections, therefore, provided an opportunity for important engagement with presidential candidates on their plans to ensure safe and inclusive education across the country.

Lawal added: “It is in this vein, in line with the organisational objectives of Malala Fund, that we are launching an aggressive campaign to mobilise and educate citizens to ask critical questions from all the candidates that are running for the office of the president.

“We hope that the campaign, in line with the Girl-child Education Project of CODE, will work with and support Arewa social media influencers and prominent people in the north.

“This is because when you look at the data by UNICEF, over 20 million children are out-of-school mostly girls and over 90 per cent of that data shows that these kids are based in northern Nigeria.

“When you look at the manifestoes of these candidates, we have not seen strong commitment on education and particularly to girl-child and if you look at most of the data, a lot of Nigerians have not decided who they would vote for.”

Lawal said the group would speak directly to the electorate, particularly the undecided voters, informing them that one thing that should inform their votes should be candidates prioritising education for the girl-child.

”It also includes their commitments to both international and local education policies and their plans to take the over 20 million children back to school among others,” he added.

Lawal said that the vote for girls’ education campaign, in collaboration with Malala Fund and CODE, was aimed at complimenting government’s initiative towards achieving inclusive education that is timely and with quality

He added that the groups’ tasks included making senior secondary education free and compulsory for all just like the universal basic education act that stops at the junior secondary school level.

Lawal said: ”This was because after junior secondary school most children from poor households drop out of school due to fees payment.

”The group is searching for presidential candidates committing to work with the National Assembly to amend the UBEC Act and ensure that girls particularly get free 12 years compulsory education.”

Lawal said the group also tasked politicians on safe schools for girls devoid of bandits or insurgents attacks as well as sexual and gender based violence for them to continue to go to school.

He urged that the government should implement the safe school declaration plan and action and the national policy on safety security and violent free education.

Ms Zaliha Lawal, Programme Manager, CODE,said the girl-child education campaign was to ensure that every girl-child in Nigeria had equitable and quality education with access to books.

Lawal said: ”CODE’s demand apart from 12 years compulsory education included asking for more and better funding for education and for Nigeria to commit at least 4% GDP and 22.5% of the national budget to education with full performance.

“We are calling for the creation of mechanisms for Grievance Redressal Mechanism (GRM) for survivors to get justice as well as access to technology for girls to encourage them to participate in Science, Technology, Engineering, and Mathematics (STEM).”

Ms Seun Durojaiye, Head of Media, Publicity and Public Relations CODE appealed to the media to join in the quest to make politicians commit to education.

“I appeal to you the media to recognise and take your power because only you can drive commitment from these candidates and this is the time to do it as the elections are drawing close.

“If you draw them out, they will be forced to make critical commitments that they must follow, more importantly; it is only the media that can drive accountability.” she said.