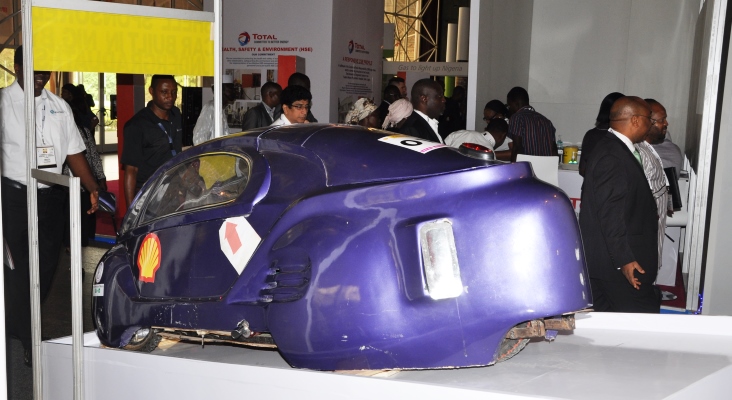 Students of three Nigerian universities have built cars they will race at the Shell Eco-marathon, Africa (SEMA) in South Africa on October 2 – 4, thanks to the sponsorship of the Shell Petroleum Development Company of Nigeria Limited (SPDC) Joint Venture.

One of the student-built cars for the Shell Eco-marathon Africa contest in Johannesburg, South Africa later this week

The students of University of Lagos, University of Benin and Ahmadu Bello University, Zaria, collectively known as Team Nigeria, will join 40 teams from four countries to test the energy efficiency of their cars at the Zwartkops Raceway, near Pretoria.

The event will be hosted by the School of Electrical Engineering at the University of Johannesburg. The Shell Eco-marathon competition challenges students in different continents (America, Europe, Asia and Africa) to build and race energy-efficient cars, and rewards those that travel farthest with the least amount of fuel.

“The sponsorship of the students opens an exciting phase in our long-standing support for education in Nigeria,” said Osagie Okunbor, Managing Director SPDC and Country Chair, Shell Companies in Nigeria.

“In addition to awarding scholarships, building schools and donating science equipment, we’re challenging the leaders of tomorrow to begin to think about, and act on the difficult energy choices facing a rapidly increasing world population.”

In 2014, the SPDC JV provided seed funding for the three universities and sponsored them to the European edition of the competition in Rotterdam, The Netherlands. They also participated in the maiden edition of Shell Eco-Marathon Africa which held in South Africa in 2014, with the University of Benin team winning the Best Designed Car award.

SPDC organised a test drive at the Campos Mini stadium in Lagos in March 2015 to test the readiness of the students. General Manager, External Relations SPDC, Igo Weli said: “The test drive was very successful and watched by cheering parents. The outcome of the event provided the assurance that the Nigerian students will pass the rigorous technical inspection before being allowed to race at Shell Eco-marathon in Europe or Africa. We’re pleased that our support has encouraged other universities to take part in this project designed to drive the efficient use of energy.”

The SPDC JV has a long history of supporting education through scholarships and other initiatives. It has endowed professorial chairs for teaching and research in eight Nigerian universities, established two centres of excellence at the University of Benin and University of Nigeria and also provides sabbatical opportunities for Nigerian university professors and senior lecturers.

In 2014, $14.8 million was invested in scholarships and other education programmes by the SPDC JV and Shell Nigeria Exploration and Production Company (SNEPCo).