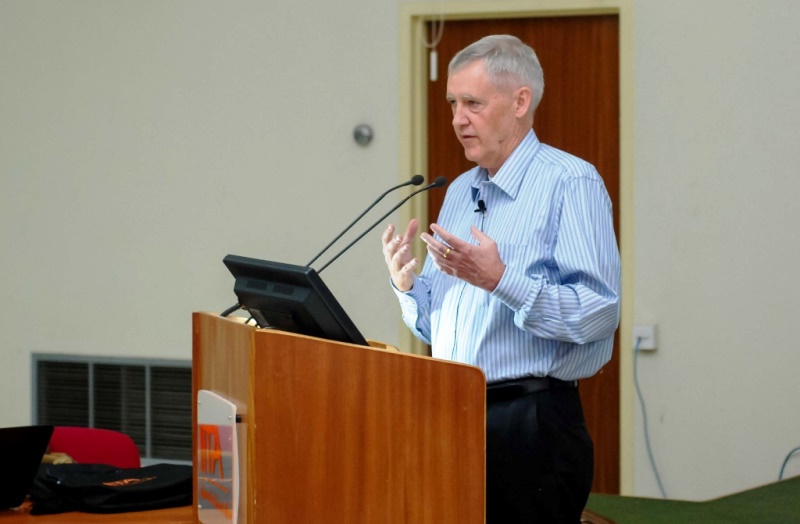 The Director of HarvestPlus, Dr Howarth Bouis, has said that developing and delivering crops that carry essential micronutrients required by the body cells to function adequately to target vulnerable population is key to solving the global problem of micronutrient deficiencies, also known as hidden hunger.

Dr Bouis, who was in Nigeria on a working visit, said this during a lecture he delivered at the Conference Center, IITA, Ibadan recently.

He highlighted why mineral and vitamin deficiencies constitute a significant public health problem and efforts by stakeholders to address the problem through dietary diversification, supplementation to children aged zero to 59 months, food fortification, and biofortification.

He described biofortification, which is the breeding of crops to increase their nutritional value, as the most viable and cost-effective strategy in the chain of solutions adopted by policy-makers. This is so because 75 percent of target vulnerable population lives in the rural areas where they eat mostly what they plant and making the staple crops carry essential vitamin and minerals provides a great opportunity to reach them in a cost-effective and sustainable way.

Delivering a lecture entitled “Biofortification of food staples: progress and future strategy,” Dr Bouis gave account of the progress HarvestPlus has made on biofortification project from conceptualization, breeding of crops, delivering of seeds to farmers for multiplication, production, value addition to select food staples, marketing and consumption of food products in over 27 countries where the crops – cassava, maize, cowpea, sorghum, millet, wheat, rice, and orange sweet potato – have been released.

Director of HarvestPlus, Dr Howarth Bouis, during a lecture on biofortification at the Conference Centre, IITA, Ibadan recently

Examining the consequences of vitamin and mineral deficiencies, Dr Bouis said, “Available record shows that 375,000 children go blind every year and a sizeable others died due to vitamin A deficiency. Iron deficiency leads to impaired cognitive abilities that are not reversible while zinc deficiency increase incidence of severe diarrhea and stunting as well as over 450,000 deaths annually.”

According to Dr Bouis, over 2 million households are currently multiplying the biofortified crops while ongoing research is focused on a number of other crops, which have capacities to deliver these essential micronutrients to target population. He added that HarvestPlus’s biofortification project is gender-sensitive and has continued to empower women farmers alongside their male counterparts because of their crucial role in decision-making at household level and in nation-building.

Rounding off the lecture, Dr Bouis thanked the donors who have made biofortification possible and called for sustained efforts to enable a continuous delivery of biofortified food staples to vulnerable population across the globe until hidden hunger is eradicated and consumption of more nutritious foods become a lifestyle for all.

Related Topics:HarvestPlus Boss offers panacea for micronutrient deficiencies
Up Next