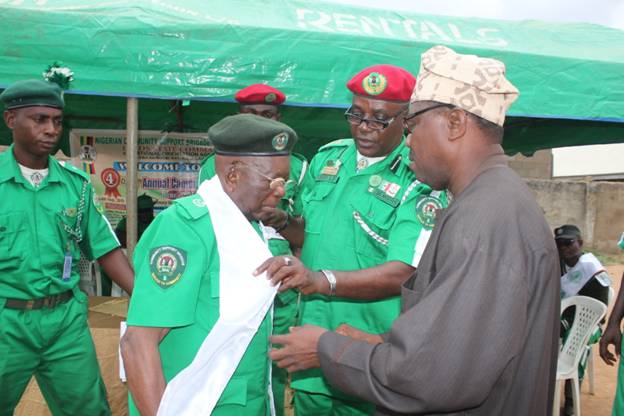 The Lagos Chapter of the National Orientation Agency (NOA), has promised to come up with platforms through which War Against Indiscipline (WAI) Brigade also known as Community Support Brigade (CSB) will be financially and materially encouraged for voluntarily serving their fatherland.

This was made known by the Deputy Director Programmes, National Orientation Agency (NOA), Mr Raphael Bowoto, at the 2015 Annual Camping Programme of the WAI Brigade, recently in Lagos.

He reiterated that NOA has been in support of the Brigade by providing them with an office for operation at NOA secretariat, and other financial and material supports. He however encouraged the WAI Brigade to solicit for funds from private organizations after coming up with programmes that will benefit their community vis-à-vis the organization itself, and even private individuals. He urged them further to sustain the self- sacrificing spirit, and help out in mobilizing the youths within the community, given that WAI is a community based organization and grass root governance is key in publicizing government activities.

He further advised the youths inherent. His words: “The task before you is enormous. The role of WAI Brigade is very critical to national development. If we are not disciplined, we can’t make headway. We have the responsibility to do so. NOA has the responsibility to orientate Nigeria and that is why the Parliamentary Act 64 of 2007 allows NOA to have National Orientation Corp which you are part of. So national responsibility and development is what should be your concern. We at NOA will continue to give you support. For you to be accorded the desired recognition, but must live above the expectation. Your attitude should prove that you are discipline and the sky shall be your limit”.

The Royal father of the day, HRH Eze Dr Cyril Anomeze, confessed that he loved WAI Brigade because it promotes law and order. He stated that the purpose of the camping activities was to train both new offices, based on the directives of the government in order to know the officers on ground for nation building. His words: “President Buhari formed WAI Brigade in 1984 and now that he is back, he wants to fortify it so that while he is fighting corruption, discipline will be fought alongside through WAI Brigade”.

On his part, the Lagos State Commander, WAI Brigade, Senior Comrade Gabriel Adeoye, stated that the essence of the annual camping was to make the officers leave their homes to a neutral ground to train and equip themselves for the task ahead in readiness to serve their community. According to him, the Brigade is a voluntary one under the supervision of NOA to ensure attitudinal change and discipline in the society. His words: “We came into this world with nothing and we will go back with nothing but our inputs and impacts will outlive us”.

He continued by pointing out that in as much as we had police, and other military officers in the society, the role of WAI is to fill in the gap wherein police couldn’t cover up. He emphasized that they provide intelligent information to the government, arrest offenders and take them to magistrate court. He highlighted some of the key functions of the WAI Brigade to include Monitoring of all elections into elective offices, assisting in road traffic management, and assisting law enforcement agencies in all aspects, amongst other.

Citing few examples of how they partnered UNICEF during the fight against Ebola spread, and how they embarked on “Operation Know Your Neighbour Campaign” when the news made round that Boko haram was in Lagos, he spoke convincingly that WAI Brigade Lagos Command had done well, while x-raying that dreams and achievements mattered much more than wealth. His words; “As the State Commander, I co-ordinate the State Command, I have State Officers, Area Commanders, and under officers within the state under me”.

Mr Tejuosho confessed that he felt happy and great being promoted and decorated, while emphasizing the need to put efforts in one’s calling to service. With six units under him, he pointed out that his new role includes ensuring that Ikorodu Command stands, ensuring discipline, ensuring properly carried out recruitment, ensure all roles are properly carried out, and ensure the country gets back to a good and disciplined society. He elucidated on how he spent time to ensure the command was revived after its dead state before his taking over the mantle of leadership.

The Guest Speaker and Security/Safety Consultant, Mr Richard Okenna, advised WAI Brigade to ensure that they are disciplined if they must enforce laws against corruption and indiscipline with compliance.  According to him, he has seen the vision in the organization, and so urged the federal government to approve of the group to become salary earners.

Related Topics:National Orientation Agency pledges support to WAI
Up Next