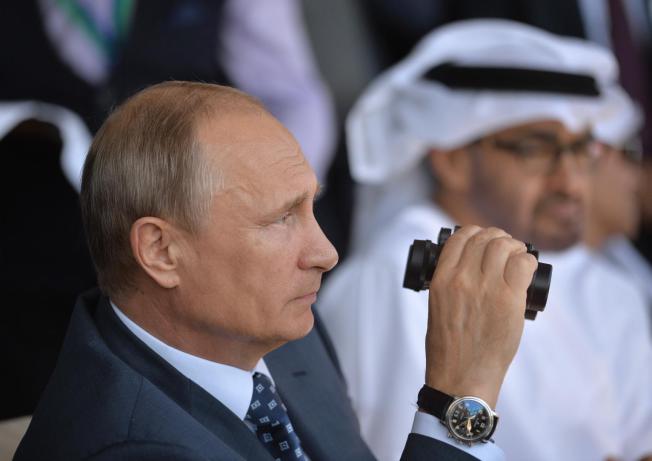 Mr Putin reiterated his support for Syrian President Bashar al-Assad, who Western countries and the Syrian opposition have said must go.

The crisis is expected to be high on the agenda at the UN in New York.

Mr Putin will hold rare talks with US President Barack Obama to discuss the issue later on Monday.

Relations between Russia and the West have been strained over Moscow’s annexation of Ukraine’s Crimea peninsula last year and support for separatist rebels.

A famous Russian expression talks about “killing two hares with one shot”. But Vladimir Putin doesn’t do things by halves: he’ll be trying to slay a whole multitude of political and economic hares with one trip to New York.

His UN speech and meeting with President Obama will put President Putin centre stage: a return to the international limelight for a leader shunned by the West over the conflict in Ukraine.

And if he convinces President Obama to put aside their differences and join together in the fight against Islamic State, Russia stands to gain on many levels: by retaining a degree of influence in Syria; by boosting Russian national security (Moscow acknowledges that IS constitutes a threat to Russia); and, crucially, by improving Russia’s international image – rebranding her from pariah to partner and refocusing attention from the conflict in Ukraine.

If Vladimir Putin achieves that, it could be the first step towards easing Western sanctions.

First, though, he will need to convince the US to trust him. It may be a hard sell.

In a separate development, UK Prime Minister David Cameron is expected to soften his stance against Mr Assad in a speech this week.

He is due to tell the annual meeting of the UN General Assembly that Mr Assad could remain temporarily in power at the head of a transitional government.

Mr Cameron – along with Mr Obama and French President Francois Hollande – has previously demanded that Mr Assad be removed from power as a condition of any peace deal, a position consistently rejected by Mr Putin.

Speaking as he arrived in New York on Sunday, Mr Cameron said: “[Bashar al-] Assad can’t be part of Syria’s future. He has butchered his own people.

He has helped create this conflict and this migration crisis. He is one of the great recruiting sergeants for Isil [IS].”

Meanwhile, Iranian President Hassan Rouhani – a key regional ally of President Assad – said the government in Damascus “can’t be weakened” if IS militants are to be defeated.

He was speaking on the sidelines of the UN General Assembly meeting in New York.

European leaders are intensifying calls for a diplomatic push in Syria in the wake of a massive influx of refugees heading for Europe.

The urgency of finding a diplomatic solution to the conflict has also been reinforced by a Russian military build-up in Syria in support of Mr Assad’s government.

Iraq on Sunday announced that it had signed an agreement on security and intelligence co-operation with Russia, Iran and Syria to help combat IS.

In an interview with CBS television, Mr Putin said the Syrian president’s troops were “the only legitimate conventional army there”.

He said the troops were fighting terrorist organisations, and Russia “would be pleased to find common ground for joint action against the terrorists”.

Mr Putin added Russia would not participate in any troop operations in Syria.

US Secretary of State John Kerry, however, said the efforts were “not yet co-ordinated” and the US had “concerns about how we are going to go forward”.

Related Topics:Russia seeks 'co-ordination' against IS to end Syria conflict
Up Next

Liverpool’s players back Rodgers after win over Villa