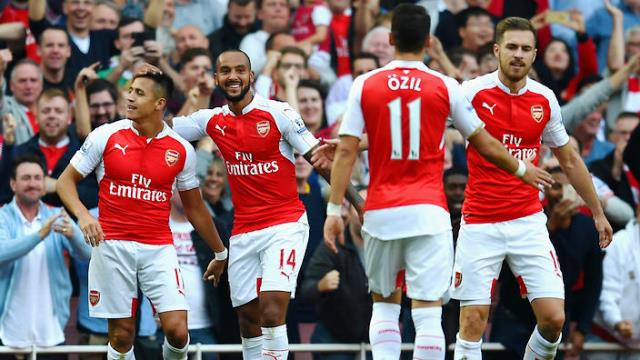 Arsenal scored twice in the opening seven minutes and ended the match as a contest with a third the 19th as they crushed Manchester United 3-0 to move above them into second place in the Premier League at the Emirates on Sunday.

The Gunners demolished United with some brilliant passing football, taking the lead when Alexis Sanchez scored with a clever near-post flick after six minutes.

They doubled their lead a minute later when Mesut Ozil rifled in from 12 metres and completed the rout when Sanchez blasted in an unstoppable shot for his sixth goal in his last three games after 19 minutes.

United, who were top of the table at the start of the weekend, rarely got going against the home side who were always in control and never looked like slipping up with Petr Cech only seriously troubled once.

The victory was Arsenal’s biggest against United for 17 years and lifted them to 16 points, two behind new leaders Manchester City, and just ahead of United on goal difference.

Arsenal came into the match under something of a cloud following their 3-2 home defeat to Olympiakos Piraeus in the Champions League on Tuesday, but they put that disappointment behind them almost from the kick-off.

United, with Ashley Young handed an unfamiliar start at left back and Italian defender Matteo Darmian on the right, were totally bamboozled.

Aaron Ramsey and Ozil combined to set up Sanchez for the first, with the Chilean flicking in at the near post to score, and a minute later Ozil carved up the United defence after a one-two with Theo Walcott.

With United’s midfield lacking any invention, pace or authority, Arsenal poured forwards and Sanchez powered into a shooting position to launch an unstoppable rocket past David De Gea in the United goal and effectively seal all three points.

United’s only real chance in the game came just before the break when Anthony Martial turned and shot but saw his effort cleared by the boot of Cech who was virtually a spectator for most of the match.

Darmian was hauled off at halftime after being tormented by Sanchez and the second half was more evenly balanced.

But Arsenal were never seriously troubled, ending United’s four match winning domestic run and at the same time beating them in the league for only the second time in their last 14 meetings.

Arsenal substitute Alex Oxlade-Chamberlain was unlucky not to make the score 4-0 when he hit the bar with a looping shot with the last kick of the game.