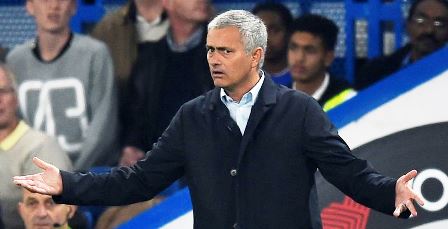 Jose Mourinho, Chelsea manager admitted that he risked the sack after a 3-1 home defeat by Southampton on Saturday left the Premier League champions 10 points off the pace.

“If the club wants to sack me, they have to sack me, because I am not running away,” Mourinho told Sky Sports in an extraordinary post-match interview at Stamford Bridge.

“It is a crucial moment in the history of this club because if the club sacks me, they sack the best manager this club had and the message is bad results and the manager is guilty.

“There are other people at the club who should assume their responsibilities and stick together.”

Having fallen behind to a 10th-minute Willian free-kick, Southampton hit back through Steven Davis, Sadio Mane and Graziano Pelle to condemn Chelsea to their fourth defeat of the campaign.

It is Chelsea’s worst start to an English top-flight season since 1978, when they finished the campaign at the foot of the table and were relegated.

Beaten 2-1 at Porto in the Champions League earlier this week, Chelsea failed to muster a single shot on target in the second half against Southampton as they lost at home for the second time in three league matches.

It was a deserved win for Ronald Koeman’s Southampton, but Mourinho felt that Chelsea should have had a penalty at 1-1 when Radamel Falcao was booked for diving in an incident involving goalkeeper Maarten Stekelenburg.

“The referees are afraid to give decisions for Chelsea,” said Mourinho, whose side have eight points from eight games and trail leaders Manchester City by 10 points.

“At 1-1, it is a huge penalty and once again we don’t get it. If the FA (Football Association) wants to punish me, they can. They don’t punish other managers. My players deserve it and the fans deserve it.

“The penalty was a giant penalty and after that the team lost even more confidence.”

Southampton manager Koeman, whose side rose to ninth, responded: “In my opinion, we totally deserve three points today. Maybe, if they had one penalty, we had two penalties. That’s a decision for the referee.”

Related Topics:Mourinho: Chelsea is free to sack me if...
Up Next