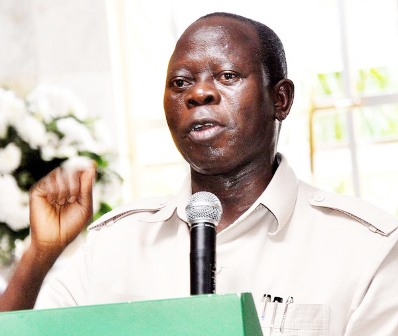 Governor Adams Oshiomhole of Edo State has clarified his position on the pension fund, saying that he never accused PenCom of diverting N3.5 trillion pension fund, because it had nothing to do directly with pension money, in the first place.

He said, rather, that his position was about how pension funds operators invest hard-earned workers’ money in Federal Government Nigeria Bonds and Treasury Bills, which, in turn, was grossly mismanaged through funding consumption.

He said, besides, that: “recently, a section of news media attributed comments to me regarding the way and manner in which pension funds to the tune of N3.5 trillion were drawn down to support recurrent expenditure and not infrastructure development. In the said reports, the impression created was that I had accused the National Pension Commission (PenCom) of colluding with the Federal Ministry of Finance to divert the said amount.

“Considering the manner in which this serious economic issue that borders on the future of the Nigerian economy and the welfare of the Nigerian workers who make contributions to the pension funds, is being misrepresented and trivialised in the media, I wish to make some clarifications and set the record straight.

“Indeed, I recall that when the pension reforms, which led to the creation of PenCom, were being formulated, the selling point of the contributory pension scheme was that pension funds should be a source of cheap and long-term funds that would be used to support programmes and investments that would enhance workers’ welfare, such as housing and the creation of a robust mortgage system.

“However, what turned out, in the management and operations of the pension funds, was a completely different ball game. It is open knowledge that the PFAs are among the major subscribers of Federal Government of Nigeria (FGN) bonds and treasury bills, which are instruments of FGN’s domestic borrowing, issued periodically by the Debt Management Office (DMO) and the Central Bank of Nigeria (CBN), respectively – on behalf of the Federal Government.

“FGN bonds, as debt securities are generally considered safest – relative to other debt instruments in the capital market, because they are governed by the “faith and credit” principle; offer attractive rates and guaranteed returns, at least in theory.

“It is, therefore, not a new revelation that total subscriptions of pension funds to the FGN Bonds are in excess of N3.5 trillion or about 70% of the total funds (estimated at N5.1 trillion) so far accrued under the contributory pension scheme. It is, also, not a secret that, in the last five years, under the previous administration, the Federal Government had engaged in monthly bond issuances, as a means of raising finance to fund recurrent expenditure and service domestic debts, rather than finance capital projects, which was the main purpose of bond issuance if domestic borrowing was to be a productive and beneficial activity to the national economy. These are facts that could easily be verified from the PFAs and PFCs, DMO, Securities and Exchange Commission, as well as CBN, if journalists and the media they represented had gone the extra mile to find out.

“The issue clearly was not about PENCOM diverting pension funds . . . to service recurrent expenditure, payment of salaries for federal employees, financing budget deficits and domestic debt servicing) rather than concrete investment in critical infrastructure, housing, etc. Pensions, as workers savings – rather than being invested in capital projects with multiplier effects on jobs and incomes – are being invested in bonds, which go into funding wasteful recurrent spending. Spending borrowed money on unproductive ventures typically generates inflationary pressures that lead to devaluation of the currency and purchasing power of workers. The net effect is that by the time these savings are required to pay pensioners in the future their real value would have been eroded, quite significantly. As we have seen – even in advanced economies – such kind of mismanagement of pension funds have easily sparked economic crisis that undermined the welfare of workers and retirees.

“I have followed the recent World Pensions Summit organised by PenCom and all through experts and analysts kept emphasising that pension funds should be invested in infrastructure like roads, power and other productive ventures to develop the national economy. The point here is that pension funds should not be invested in instruments that mobilise funds only for unproductive and wasteful ventures.

“It is in the public domain that federal budgets in the last four years have devoted as much as 85% of the budgetary outlay to recurrent expenditures including salaries. The National Assembly on whose onus rests the approval of the budget has been lamenting year-in-year-out, this clearly bad economics; a situation in which only a paltry 15% of the budgetary outlay was devoted to capital projects and investment in the last five years. Federal legislators have also openly complained about the fact that even the 15% capital expenditure is hardly executed fully, implying that the amount devoted to recurrent expenditure will be even much higher than the 85% reported, officially.”