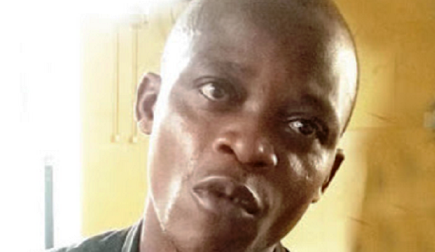 A Lagos Chief Magistrate Court, sitting in Ebute-Metta, Lagos, has arraigned one Mr. Nelson Oamen, 35, for allegedly killing his father by stabbing him in his sleep with a broken bottles on his neck and chest.

Oamen, who is the fourth son, among eight children, is facing a one-count charge of murder.

The charge read: “That you Nelson Oamen, ‘M’, on the 18th day of September 2015, at about 1130hrs, at Abesan Estate, Ipaja, Lagos in the Lagos Magisterial District did unlawfully kill one Sunday Oamen ‘M’ aged 75years by stabbing him on his chest and stomach with broken bottle and thereby committed an offence punishable under Section 221 of the Criminal Law of Lagos State of Nigeria 2011.

The defendant was said to have allegedly killed his father because he (deceased) wasn’t taking care of him and also refused to buy him a bus.

The police prosecutor, A.S.P Adegoke made an application to remand the defendant in prison custody for the next 30 days to enable him duplicate the case file and send it to the Divisional Police Prosecutor (DPP) for legal advice. The presiding magistrate, Mrs. Botoku ordered that Oamen should be remanded in prison custody pending DPP legal advice.

The matter has been adjourned till November 5, 2015.

Related Topics:3575Sonstabs fatherto death over refusal to buy him a bus
Up Next