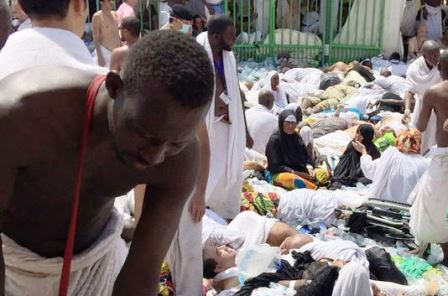 The National Hajj Commission of Nigeria (NAHCON) on Sunday confirmed that 145 Nigerians were killed in the September 24 stampede in Mina, Saudi Arabia.

Although Saudi authorities confirmed more than 769 pilgrims from across the world dead, the death toll is believed to be over 1,000 with Iran having the higher death casualty of over 400 people. About 1,000 people were also injured during the stampede on one of the roads leading to the Jamarat complex (stone-throwing site) in Mina.

Briefing journalists in Mecca in an update, NAHCON’s commissioner in charge of Planning, Research, Information and Library Services, Saleh Okenwa, said that seven of the 42 injured pilgrims were still on admission at various hospitals in Saudi Arabia.

He, however, said that the number of pilgrims earlier declared missing had reduced from 214 to165 following the discovery of additional bodies of some Nigerians killed in the stampede.

On the transportation of pilgrims back to Nigeria, NAHCON’s Commissioner in charge of Operation, Saleh Modibbo, said that more than 60 per cent of the pilgrims had been transported back to the country.

Specifically, he said that 40,850 of the 76,000 Nigerians, who performed the pilgrimage had been transported back to the country.

Among those transported back to Nigeria are pilgrims from Kwara, Gombe and Nassarawa states.

Mr. Modibbo said that the various committees set up by NAHCON helped in processing the pilgrims’ documents and luggage.

The Chairman of the commission, Abdullahi Mukhtar, said while fielding questions from journalists that the Nigerian mission in Saudi Arabia would continue to monitor the seven injured pilgrims still on admission at various Saudi hospitals even after the Hajj operation.

“We have consistently been monitoring them; the Nigerian mission in Saudi Arabia will continue to monitor them after the hajj operation until they are discharged,” he said.

Mr. Mukhtar said that bodies of the deceased had been buried according to Islamic rights.

He said it was not true that the deceased were buried en masse as speculated in a section of the Nigerian society.

The chairman said that the Saudi authorities took finger prints of the deceased and that DNA tests would be conducted on mutilated bodies to ascertain whether those declared missing were dead or alive.

“Blood samples of the deceased pilgrims already in Saudi Arabia were taken while that of those who do not have immediate members of their families here will be taken in Nigeria and transported to Mecca for the test,” he stated.

On victims of the crane crash, he said that the Nigerian mission had details on the affected persons, adding, “the mission is pursuing their cases until compensation is paid.” (NAN)