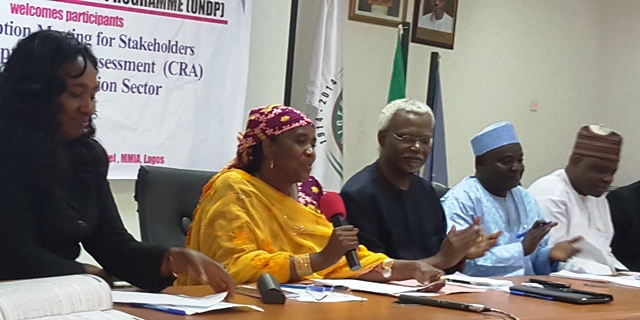 Hajia Binta Bello, Permanent Secretary, Federal Ministry of Aviation, has expressed delight at the positive results from the collaboration between the aviation sector and the Independent Corrupt Practices Commission (ICPC).

The Permanent Secretary disclosed this in Lagos recently, while delivering the keynote address at the stakeholders’ inception meeting on Anti-Corruption measures in the aviation sector organized by the ICPC.

Hajia Binta Bello, who was accompanied by the Directors of Human Resources Abubakar Tsafe and Director Audit jibrin Manigi, of the Federal Ministry of Aviation and Chief Executives of Parastatals under the Ministry, stated that the huge potential of the Nigerian aviation industry could only be actualized in an environment that is corrupt-free, upholds high ethical standards and complies fully with international best practices.

At the occasion attended by the Chairman of ICPC, Mr Ekpo Nta, she said that as part of efforts to sustain growth, confidence and transparency in the aviation industry, the Ministry signed an M.O.U with the ICPC in December 2014, which has culminated into the deployment of ICPC staff for surveillance activities at the major airports, undercover operations for detection of infractions, and mandatory training of selected staff of the Ministry’s agencies and other stakeholders on ethics, professional standards and moral values at the ICPC Anti-Corruption Academy (ACAN).

The Permanent Secretary stated further that in practical terms, the collaboration with ICPC has contributed immensely to the drastic reduction in the activities of touts and unscrupulous elements at the nation’s airports.

Hajia Bello, while advising the ICPC to sustain the tempo of its surveillance activities at the airports, assured the Commission of the Ministry’s total support and also implored sister agencies at the airports to do same.

Earlier in his welcome address, the Chairman of ICPC, Mr Ekpo Nta said the Corruption Risk Assessment in the Aviation sector inception meeting for stakeholders is bringing together key drivers to deliberate and implement strategies developed to fight the menace.

The Managing Director of FAAN, Eng Saleh Dunoma expressed confidence that this collaboration will yield the needed results.

Eng Dunoma said FAAN had deployed several strategies in the past and will continue to support efforts at helping the Authority achieve its mandate of a safe, secure and customer centric airports.

Goodwill messages were delivered by the Director General of the NCAA, Capt Muktar Usman and heads of other aviation agencies.

The session later broke into the business  sessions where the Police, Customs, Immigration, NDLEA, Port Health, and other stakeholders discussed strategies for implementation.