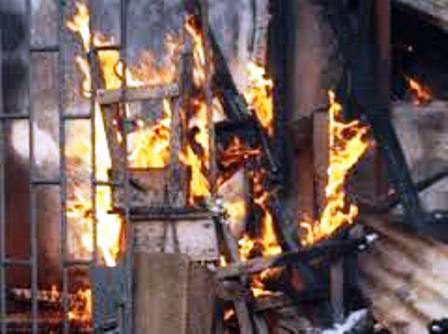 A mid night inferno in parts of Asaba, the Delta State capital, has destroyed a building and property values at N3.5 million.

One of the victims, Ikechukwu Iwekuba, a refrigerator repairer, who lives in the Umuagu area of the state capital, listed properties destroyed to include 20 refrigerators, 20 air conditioners, working tools and other items which he valued at N3.5million.

His pain was worsened on the knowledge that the properties belong to his customers who had kept them in his shop for repairs.

According to him “I was called at about 1am, at night that my shop and others were on fire, I immediately left my house located at West-End area, and when I got there everything had been burnt to rubbles. But I must commend the police and the fire service men who responded promptly, if not the fire would have escalated”.

Asked what might have caused the fire, he said a neighbour told him that it resulted from a high voltage power supplied by BEDC that sparked the fire.

Another victim, Mr. Bernard Ukachukwu, owner of a printing press in the burnt building, said he lost all his printing papers, computers, scanners, CD ROMS and other computer accessories.

Related Topics:Midnight fire destroys N3.5m worth property in Delta
Up Next