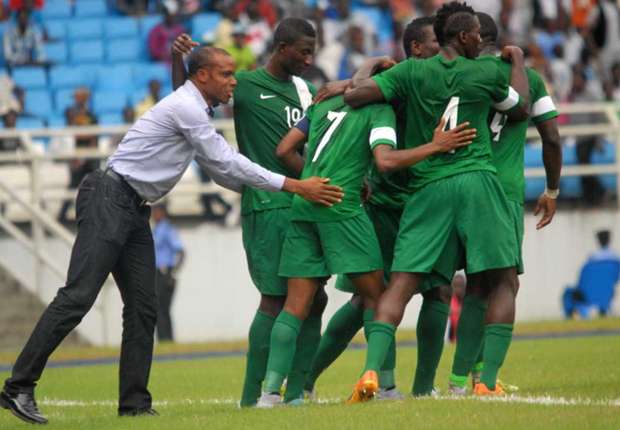 Efe Ambrose, Moses Simon and Odion Ighalo provided goalscoring contributions as Nigeria claimed a deserved 3-0 victory over Cameroon in an international friendly in Brussels on Sunday.

Carl Ikeme kept his place in goal with Leon Balogun, Ambrose, Shehu Abdullahi and Elderson Echiejile starting in a four-man defence for the Super Eagles.

It was however the Super Eagles that created the first real dangerous moment through Igbonu who delivered a telling low cross from the right after a lovely interchange of passes between Musa and Emenike.

Nigeria continued to cause problems on the wings as exemplified by Simon’s electrifying run down the left which caused panic in the Cameroon rear guard.

The three-time African champions were looking menacing and came close again in the 23rd minute with Emenike forcing a smart save from Cameroon goalkeeper Fabrice Ondoa.

Cameroon’s best chance of the half arrived just after the half hour when Ambrose almost diverted a harmless ball into his own net when goalkeeper Carl Ikeme seemingly had the danger covered.

Nigeria eventually took the lead in the 39th minute as Ambrose rose highest to head home a John Obi Mikel free kick from the left with Ondoa stranded in a crowded penalty area.

The Indomitabe Lions tried to stir from hibernation after the Nigeria goal and Benjamin Moukandjou did great work on the right in the 43rd minute but saw his dangerous cross fail to reach anyone in a yellow shirt when the slightest of touches would have seen the net bulge.

A minute later, the Lions threatened again from the left wing but Clinton N’jie’s cross again failed to reach a Cameroonian head or foot at the opportune moment.

Cameroon started the second half in the worst possible manner with Stephane M’bia dismissed after picking up a second booking following a shocking tackle on Igbonu a minute after the restart.

Ikeme was forced into his first save on the evening in the 56th minute when Moukandjo’s curling drive from outside the penalty area appeared to be heading into the bottom corner.

Cameroon continued to pour forward in search of the equaliser but were leaving open gaps at the back.

The Super Eagles exploited the spaces and made the Lions pay on the hour following a counter attack finished with deadly efficiency.

KAA Gent attacker Simon latched onto a long pass and turned a Cameroonian defender inside out before beating Ondoa at his near post with a cultured left-footed finish.

Substitute, Ighalo headed home a late third following an excellent team move as the Eagles finished things off with a flourish.

Oliseh will be pleased with his charges’ exertions on the night as his charges closed out the win playing some expansive football late in the second half.

Related Topics:Oliseh’s Eagles tame Lions of Cameroon
Up Next