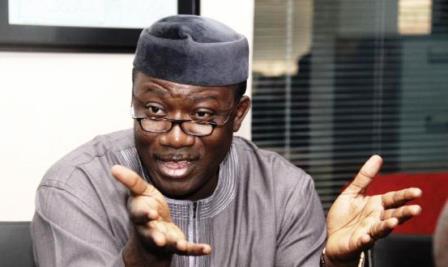 …Says I never purchased a bed for N50m

Dr. Kayode Fayemi, former Governor of Ekiti State, Tuesday, debunked reports that he ran economy of the state to ground, while he was in office.

Fayemi, one of the 10 ministerial nominees during the screening exercise by the Senate, said he governed Ekiti with transparency and accountability.

Responding to a thought-provoking question asked by Senator Olusola Adeyeye, representing APC, Osun Central to clarify newspaper reports that he left the State in huge debt, that he spent much money on the Government House.

The former governor emphasized that all the reports were all rumours, stating that the government house was built with only N2.5 billion.

He said being one of the youngest states in Nigeria, without a government house for 19 years, the magnificent Government House he saw in Akwa Ibom, when he visited former Governor Godswill Akpabio, enticed him to embark on the project to give Ekiti State, a befitting Government House which will also serve as tourism site.

Fayemi added that the controversial N50 million bed in the government house wasn’t purchased at that price.

According to him, none of the beds in the government house worth N1.5 million and insisted that if anyone want to prove him wrong, “let them come with invoice of the beds”, said he.

Dr. Kayode Fayemi, however told the Senate that he only left a debt of N#‎18 billion as against N‎86 billion claimed by Governor Ayodele Peter Fayose.

He therefore submitted that the time had come to reposition the education sector of the country.