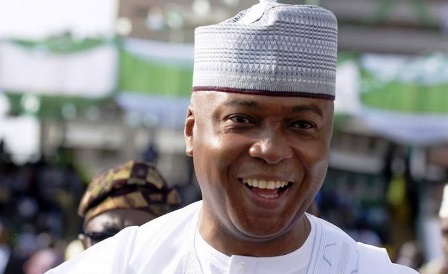 The tribunal gave its ruling while the screening of the ministerial nominees was taking place at the senate.

Josiah Majebi, chairman of the three-man panel, struck out he petition of ‎Abdulrahman Abdulrasak, candidate of the Peoples’ Democratic Party (PDP) in the March 28 election. Abdulrasak had asked the tribunal to annul Saraki’s victory because he won the election. But Majebi dismissed Abdulrasak’s claim for lacking in basis and substantial evidence.

Saraki is representing the Kwara central senatorial district in the upper chamber of the national assembly. Meanwhile the All Progressives Congress (APC) in Kwara state has welcomed the ruling of the tribunal, describing it as as an affirmation of the free mandate given to the senate president by his people.

“Kwara APC received with delight the judgement of the election petition tribunal sitting in Ilorin which upheld the electoral victory of the Senate President, Dr. Abubakar Bukola Saraki,” read a statement issued by Sulyman Buhari, publicity secretary of the party in the state.

Related Topics:Court upholds Saraki’s election to NASS
Up Next