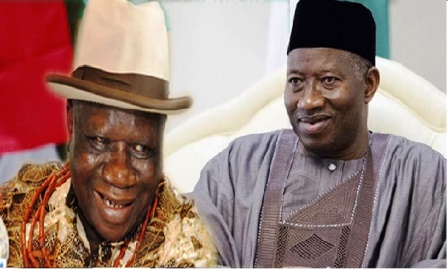 Every President probably needs a strong, passionate ally like Chief E. K. Clark. But what happened? What went wrong? Don’t get me wrong. I am not necessarily saying that the Ijaw leader should have remained loyal to and defend Goodluck Jonathan because they are both Ijaws, patriotism definitely could be stronger than ethnic affinities, nonetheless that E. K. Clark tale about leaving politics and becoming a statesman is nothing but sheer crap

I have tried delaying the writing of this piece in the honest expectation that someone probably misquoted Chief E.K. Clark, when he reportedly publicly disowned former President Goodluck Jonathan.

I had hoped that our dear father, E.K. Clark, would issue a counter statement and say the usual things politicians say: “they quoted me out of context!” “Jonathan is my son”. That has not happened; rather, some other Ijaw voices, including one Joseph Evah, have come to the defence of the old man, to join hands in rubbishing a man they once defended to the hilt and used as a bargaining chip for the Ijaw interest in the larger Nigerian geo-politics.

If President Jonathan had returned to power on May 29, 2015, these same persons would have remained in the corridors of power, displaying all forms of ethnic triumphalism.

It is the reason in case they do not realize it, why the existent power blocs that consider themselves most fit to rule, continue to believe that those whose ancestors never ran empires can never be trusted with power, hence they can only be admitted as other people’s agents or as merchants of their own interests which may even be defined for them as is deemed convenient. Mercantilism may bring profit, but in power politics, it destroys integrity and compromises otherwise sacred values.

President Jonathan being publicly condemned by his own Ijaw brothers, particularly those who were once staunch supporters of his government further serves the purpose of exposing the limits of the politics of proximity. Politics in Africa is driven by this particular factor; it is at the root of all the other evils: prebendalism, clientelism and what Matthew Kukah has famously described as the “myownisation of power.”

It is both positive and negative, but obviously, more of the latter than the former. It is considered positive only when it is beneficial to all parties concerned, and when the template changes, the ground also shifts. As in that song, the solid rock of proximity is soon replaced by shifting sands. Old worship becomes new opportunism. And the observant public is left confounded.

Chief E.K. Clark? Who would ever think, Chief E.K. Clark would publicly disown President Jonathan? He says Jonathan was a weak President. At what point did he come to that realization? Yet, throughout the five years (not six, please) of the Jonathan Presidency, he spoke loudly against anyone who opposed the President.

He was so combative he was once quoted as suggesting that Nigeria could have problems if Jonathan was not allowed to return to office. Today, he is the one helping President Jonathan’s successor to quench the fires. He always openly said President Jonathan is “his son.”

Today, he is not just turning against his own son, he is telling the world his son as President lacked the political will to fight corruption. He has also accused his son of being too much of a gentleman. Really? Gentlemanliness would be considered honourable in refined circles. Is Pa E.K. Clark recommending something else in order to prove that he is no longer a politician but a statesman as he says?

As someone who was a member of the Jonathan administration, and who interacted often with the old man, I can only say that I am shocked. This is the equivalent of the old man deleting President Jonathan’s phone number and ensuring that calls from his phone no longer ring at the Jonathan end.

During the Jonathan years, Chief E. K. Clark was arguably the most vocal Ijaw leader defending the government. He called the President “my son,” and both father and son remained in constant touch.

There is something about having the President’s ears in a Presidential system, elevated to the level of a fetish in the clientelist Nigerian political system. Persons in the corridors of power who have the President’s ear- be they cook, valet, in-laws, wife, cousin, former school mates, priests, or whatever, enjoy special privileges.

They have access to the President and they can whisper into his ears. That’s all they have as power: the power to whisper and run a whispering campaign that can translate into opportunities or losses for those outside that informal power loop around every Presidency, that tends to be really influential.

Every President must beware of those persons who come around calling them “Daddy”, “Uncle”, na my brother dey there”, “my son”, “our in-law”- emotional blackmailers relying on old connections. They are courted, patronized and given more attention and honour than they deserve by those looking for access to the President or government.

Even when the power and authority of the whispering exploiters of the politics of proximity is contrived, they go out of their way to exaggerate it. They acquire so much from being seen to be in a position to make things happen.

Chief E. K. Clark had the President’s ears. He had unfettered access to his son. He was invited to most state events. And he looked out for the man he called “my son”, in whom he was well pleased. Chief Clark’s energy level in the service of the Jonathan administration was impressive. Fearless and outspoken, he deployed his enormous talents in the service of the Jonathan government. If a press statement was tame, he drew attention to it and urged a more robust defence of “your boss.”

If any invective from the APC was overlooked, he urged prompt rebuttal. If the party was tardy in defending “his son”, he weighed in.

If anyone had accused the President of lacking “the political will to fight corruption” at that time, he, E.K. Clark, would have called a press conference to draw attention to the Jonathan administration’s institutional reforms and preventive measures, his commitment to electoral integrity to check political corruption, and the hundreds of convictions secured by both the ICPC and EFCC under his son’s watch.

So prominent and influential was he, that ministers, political jobbers etc etc trooped to his house to pay homage.

In due course, those who opposed President Jonathan did not spare Chief E. K. Clark either. He was accused of making inflammatory and unstatesman-like statements. An old war-horse, nobody could intimidate him. He was not President Olusegun Obasanjo’s fan in particular. He believed Obasanjo wanted to sabotage his son, and he wanted Obasanjo put in his place. Beneath all of that, was an unmistaken rivalry between the two old men, seeking to control the levers of Nigerian politics.

Every President probably needs a strong, passionate ally like Chief E. K. Clark. But what happened? What went wrong? Don’t get me wrong. I am not necessarily saying that the Ijaw leader should have remained loyal to and defend Goodluck Jonathan because they are both Ijaws, patriotism definitely could be stronger than ethnic affinities, nonetheless that E. K. Clark tale about leaving politics and becoming a statesman is nothing but sheer crap.

If Jonathan had returned to office, he would still be a card-carrying member of the PDP and the “father of the President” and we would still have been hearing that famous phrase, “my son”. Chief E. K. Clark, five months after, has practically told the world that President Buhari is better than “his own son”.

It is the worst form of humiliation that President Jonathan has received since he left office. It is also the finest compliment that President Buhari has received since he assumed office. The timing is also auspicious: just when the public is beginning to worry about the direction of the Buhari government, E. K. Clark shows up to lend a hand of support and endorsement.

Only one phrase was missing in his statement, and it should have been added: “my son, Buhari.” It probably won’t be too long before we hear the old man saying “I am a statesman, Buhari is my son.” I can imagine President Obasanjo grinning with delight.

If he really wants to be kind, he could invite E.K. Clark to his home in Ota or Abeokuta to come and do the needful by publicly tearing his PDP membership card and join him in that exclusive club of Nigerian statesmen!

The only problem with that club these days is that you can become a member by just saying so or by retiring from partisan politics. We are more or less being told that there are no statesmen in any of the political parties.

It is not funny. Julius Ceasar asked Brutus in one of the famous lines in written literature: “Et tu Brutus?” President Jonathan should ask Chief E. K. Clark: “Et tu Papa?” To which the father will probably tell the son: “Ces’t la vie, mon cher garcon.” And really, that is life.

In the face of other considerations, loyalties vanish; synergies collapse. The wisdom of the tribe is overturned; the politics of proximity dissolves; loyalties remain in a perpetual process of construction. Thus, individual interests and transactions drive the political game in Nigeria, with time and context as key determinants.

These are teachable moments for President Jonathan. Power attracts men and women like bees to nectar, the state of powerlessness ends as a journey to the island of loneliness.

However, the greatest defender of our work in office is not our ethnic “fathers and “brothers” but rather our legacy. The real loss is that President Jonathan’s heroism, his messianic sacrifice in the face of defeat, is being swept under the carpet and his own brothers who used to say that the Ijaws are driven by a principle of “one for all and all for another”, have become agent-architects of his pain.

The Ijaw platform having seemingly been de-centered, Chief E.K. Clark and others are seeking assimilation in the new power structure. It is a telling reconstruction of the politics of proximity and mimicry.

Chief E.K. Clark once defended the rights of ethnic minorities to aspire to the highest offices in the land, his latest declaration about his son reaffirms the existing stereotype at the heart of Nigeria’s hegemonic politics.

The same hegemons and their agents whom Clark used to fight furiously will no doubt find him eminently quotable now that he has proclaimed that it is wrong to be a “gentleman”, and that his son lacks “the political will to fight corruption”. There is more to this than we may ever know.

Chief Clark can insist from now till 2019, that he has spoken as a statesman and as a matter of principle. His re-alignment, is curious nonetheless.