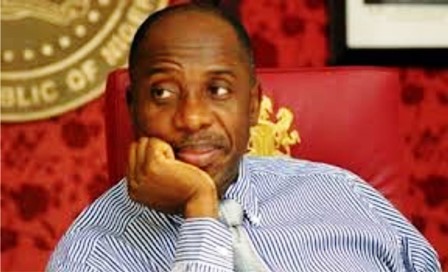 The Ethics and Privileges Committee of the Senate is to meet today to decide the fate of Ministerial nominee from Sokoto State, Ms Aisha Abubakar on the petition filed against her by stakeholders from the state.

The Committee, has however, completed its Reports on the probe of the petition filed against the former governor of River Sate, Chibuike Rotimi Amaechi on his nomination by President Muhammadu Buhari for a ministerial job.

The failure of the Committee to submit the report last week had contributed to the stalling of screening of Amaechi by the Senate.

The Senate is however expected to invite the ministerial nominee from Sokoto State any time before Wednesday for the probe of the petition against her to determine whether or not she is to be screened.

There are indications that the Senate will complete the screening of the remaining ministerial nominees this week, having earlier confirmed 18 nominees for appointment as Ministers in the cabinet of President Muhammadu Buhari.

President Buhari had last week bowed to pressure by withdrawing his nominee from Niger State, Ahmed Ibeto former Deputy Governor with expectations that he will replace him with a new nominee.

The petition against Ms Abubakar was filed before the Senate during its Thursday’s plenary by Senator Ibrahim Gobir (APC Sokoto East).

The petition which was equally endorsed by women group in from the State is seeking the withdrawal of Aisha’s nomination.

The Senate President Bukola Saraki who took delivery referred it to the Ethics and Privileges Committee.

The petition tabled before the Senate was signed by the 23 local government chairmen of the party in the state who argued that by allowing Miss Abubakar’s nomination, a section of the constitution of Nigeria which guarantees fair distribution of power among all interest groups in the country would have been breached.

The Political stakeholders from Sokoto in the petition said the nomination of Ms Abubakar was against equity, justice and fairness since she is said to have hailed from the same local government area with the governor of her state, Aminu Waziri Tambuwal.

The two are said to be from Tambuwal local government area of the state.

The Petition read in part, “In the exercise of your constitutional powers to appoint the Minister of the Government of the Federal Republic of Nigeria that will represent Sokoto State as envisaged by the Constitution of the Federal Republic of Nigeria, due regard was not given to the intendment of the Constitution which stipulates some conditions precedent as basic qualification for a nominee and principle of equity as envisaged by the Constitution to wit: Section 147(3) provides that, “any appointment under subsection (2) of this constitution shall be in conformity with provision of section 14(3) of this constitution… Section 14(3) provides:

“The composition of the Government of the Federation or any of its agencies and the conduct of its affairs shall be carried out in such a manner as it reflect the Federal Character of Nigeria and the need to promote national unity, and also to commend national loyalty, thereby ensuring that there shall be no predominant of persons from a few states or from few ethnic or other sectional groups in that government or any of its agencies.”