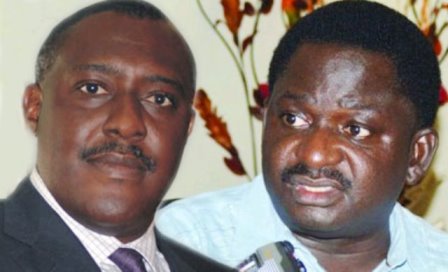 Chief Olisa Metuh, National Publicity Secretary of the Peoples’ Democratic Party (PDP), has taken a swipe at the Special Adviser, Media to President Muhammadu Buhari, Femi Adesina, saying he should stop attacking him to satisfy his pay master.

According to Metuh, rather than insulting him as a person, Adesina should address issues raised by the PDP against the All Progressives Congress (APC)-led government.

A statement signed by Richard Ihediwa, Special Assistant to Metuh read: “Our attention has been drawn to a vacuous statement by the media aide to President Muhammadu Buhari, Mr. Femi Adesina, in his futile attempt to counteract facts presented by the PDP that this administration is dictatorial and selective in its fight against corruption.

“Mr. Adesina, in his habitual deceptive and diversionary manner, left the critical issues of governance raised by Sunday’s press conference addressed by the PDP National Publicity Secretary, Chief Olisa Metuh, and as usual, embarked on insults, shadow-chasing and fouling of the media space with uncouth language.

“This office has noted Mr. Adesina’s several previous unwarranted personal attacks and insults deliberately targeted at the person of the PDP National Publicity Secretary, in his desperate attempt to impress his paymaster and retain his job.

“Our answer remains that inasmuch as we know that this Presidency aide lacks depth on his current assignment and has no credible defence, being overwhelmed in his job of trying to launder the image of this government, the characteristic resort always, to lies, malice and vituperations should not be an option.

“While we appreciate the fact that Mr. Adesina is not conversant and knowledgeable in politics and intricate issues of governance, he should have applied the common sense of covering his hollowness in this regard and save the Presidency the embarrassment of an arrogant attempt to wave off very serious questions hanging in the face of the present administration.

“May we remind the Presidency that Nigerians are still waiting for its response to salient national issues raised by the PDP National Publicity Secretary, bordering on relentless abuse of power, selective application of war against corruption, witch-hunt of opposition elements and perceived political opponents, threats to democratic institutions and government’s clear lack of direction on economic issues.

“How can Mr. Adesina explain the fact that while former PDP governors and ministers are being arrested, their APC counterparts, who have more damaging petitions with anti-graft agencies are being rewarded with ministerial positions, with yet others granted APC tickets for Kogi and Bayelsa governorship elections respectively?

“Perhaps Mr. Adesina is confirming that the nation now has two separate laws for prosecuting the war against corruption; one, to nail PDP members and perceived opponents of government, and the other to protect APC members and friends of the present administration.

“We challenge Adesina, in the euphoria of trying to satisfy his paymaster, to defend him by showing Nigerians any APC member that has so far been invited or arrested by any anti-graft agency, other than PDP members and perceived political opponents such as Senate President Bukola Saraki.

“It is unfortunate that in trying to wear his master the garb of a democrat, Mr. Adesina has instead muddled up and bungled his assignment with his arrogant posturing on important national issues. Whereas this media aide may have done well in the confines of his newsroom as a media professional, he has so far succeeded in making a mockery of the office of a spokesperson of the President of a country like Nigeria.

“Our final take therefore is that the Presidency must note that Nigerians are still waiting for a proper response on the issues raised instead of invectives from an aide who apparently talks before he thinks.”

Related Topics:Metuh to AdesinaStop attacking me to satisfy your pay master
Up Next

The Street day: AMAMN partners with COSON on COSON week

Oliseh fights on despite ill health