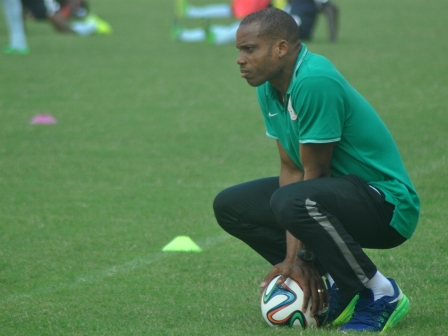 Members of the backroom staff of the Super Eagles unsuccessfully tried to persuade head coach Sunday Oliseh not to take part in Monday evening’s training session following concerns over his health.

Oliseh has been indisposed and was supposed to miss Saturday’s 2016 African Nations Championship (Chan) qualifier against Burkina Faso at the Adokiye Amiesimaka Stadium, Port Harcourt.

The Nigeria national team head coach however defied warnings and took his place in the dugout to inspire his charges to an impressive 2-0 win over the Stallions.

“The coach (Oliseh) has not been very well of late. Just before we left our hotel for Monday evening’s training session, we begged him to stay back at the hotel because he was not feeling well at all.

“It was raining heavily but he insisted and joined us to the stadium and took part in the session,” the team’s media officer, Toyin Ibitoye, told supersport.com.

Oliseh is however receiving close attention from the medics and it is believed the gaffer’s health will soon be return to optimum levels.

“The team doctor has been attending to him and he’s been taking a lot of antibiotics.

“He struggles even to speak because of his present condition but we are hoping he recovers soon enough.

“Coaching is not an easy job especially when the team is not playing the way you want them to.

“So for coach Oliseh to still be involved in all of the team’s training sessions shows how devoted he is to his job,” he said.

Related Topics:Oliseh fights on despite ill health
Up Next

Metuh to Adesina, Stop attacking me to satisfy your pay master