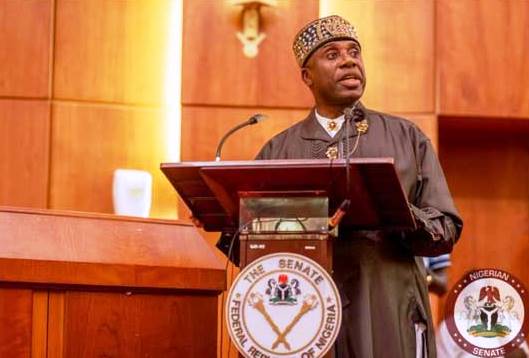 The Senate after some forms of political rigmarole formally screened the former governor of Rivers State, Rotimi Chibuike Amaechi on Thursday, just as the Peoples’ Democratic Party (PDP) Senators showed restraint towards his screening.

Security was tightened round the National Assembly complex with an amoured was moved towards the main entrance while combat ready police stood on guard to prevent possible breakdown of law and order.
Amaechi’s confirmation as a minister will now depend on how he will be able to muster majority support from the Senate next week when the process of confirmation would be thrown to Senators in a voice vote.
His main opponents among Senators are the PDP Caucus who are expected to make stiff efforts in overwhelming the ruling APC in a voice vote, as they demonstrated penultimate week when the spokesperson of APC, Alhaji Lai Muhammed was to be confirmed.
The entry of Amaechi to the National Assembly sent the entire complex agog, as supporters and well-wishers struggled to catch a glimpse of him in open sympathy based on the media hype over plots to prevent his screening by political opponents.
The former governor even had a hectic moment in finding his way out of the National Assembly complex, even as staff of the Assembly abandoned their offices, mobbing him in the process in show of solidarity, all chanting, “Amaechi, you don win, you don win…”
He was eventually spirited out of the complex with combine efforts of security men and women who have been on guard.
Amaechi’s screening had been scheduled twice and had twice been shifted amid political intrigues aimed at preventing his emergence as a minister, first from the government of Rivers State and the PDP caucus in the Senate.
Amaechi had hardly been invited for screening when the PDP shoed opposition to his nomination with insistence that the report of Senate Committee on Ethics, Privileges and Public Petition should be laid the Chairman of the Committee, Senator Sam Anyawu for consideration.
The Minority leader, Senator Godswill Akpabio had to this effect raised a point of order to raise issues against the screening of Amaechi, but he was countered by Senate Majority leader, Senator Ali Ndume ‎who explained that the report on petition against the former governor had already been laid, assuring that it would be distributed to senators for consideration.
Akpabio had said the opposition will not ask any question from Ameachi unless the report laid by the Committee is considered.
‎To avoid subjecting the screening of Amaechi to further intrigues, the Senate Leader Ndume moved a motion seeking to let go of the former governor who he said is also a former Speaker, urging the Senate to ask him to ‘bow and go’.
Responding to question on corruption allegation against him, the former governor said he was never indicted by any panel on corruption while he urged the lawmakers to check the report of the Senate Panel on petition against him.
He also told the Senators that he had never taken bribe in his life.
When asked to define corruption, Ameachi said,” Corruption is very difficult to define. If you are a public officer people believe you must take bribe. I have never taken bribe in my life. But if they send a girl to you and you sleep with the girl and do her favour, you are corrupt.
“Corruption is a very wide concept. If people are contesting for a position and you offer your son, brother or sister an opportunity to hold that position, probably the person is not qualified, you are corrupt. So, it is difficult for me to define corruption.
He also said that he decided to join All Progressive Congress (APC) when he discovered that the former President Goodluck Jonathan was not suitable for the task of developing Nigeria.
He said he and other members of APC felt the need to tackle corruption in Nigeria, a reason they supported the candidature of Muhammadu Buhari for election as President on the platform of the APC.
He said, “We sold to the public the fact that there was massive corruption in the system. And there was the need to fight that corruption. And the only way to fight that corruption is to put a new government. And we had to get a signpost candidate.
“The signpost candidate is a man who the Nigerian public has seen as an incorruptible President. And that was why the party had to put President Buhari forward. And we thought that there was a need to do things differently. I thought that as good as the former President may have been, I don’t think he was suitable enough to pursue the growth and development of Nigeria. So, we need to offer opportunity to somebody we believe is better than the former President.”
Amaechi promised to complete the construction work on the East-West road which according to him is not just for the Niger Delta but an economic route which according to him will catalyse the economic prosperity for Nigeria if completed.
After almost an hour of being drilled by Senators, he was eventually asked to bow and go.
However, other ministerial nominees screened along with former‎ governors were Heineken Lokpobiri, Cladius Omoyele Daramola Folorunso, Baba Shehuri Mustapha and Ocholi Enojo James.

Related Topics:PDP Senators plot to prevent Amaechi’s confirmation even after screening
Up Next