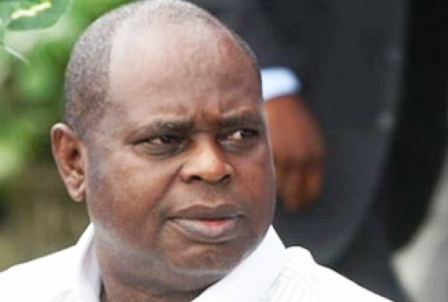 The leadership of the All Progressive Congress (APC), in Bayelsa state, paid a condolence visit to members of the Alameiseigha family at their Yenagoa home, to commiserate with them on the sad and shocking demise of the first civilian Governor of Bayelsa state, Chief Diepreye Alamieyeseigha, who died on Saturday at the age 63.

The state Chairman of the party, Chief Tiwei Orunmighe who led the delegation, said the man whose death is been celebrated today has impacted positively in Bayelsa, the Ijaw nation and Nigeria in particular, adding that the legacies that have been left behind are for the younger generation of the Ijaw struggle to live by.

“We are actually celebrating, we are not mourning‎, and this is not the moment to mourn, Alameiseigha remains a hero to the Ijaw people. He was indeed a realist, he stood for the Ijaw people, the love he showed his people was returned in betrayal”

The same people accusing the APC and the British government of conspiracy in his death was the same people that protested carrying casket in Yenagoa against him, impeached him without investigations of the allege crimes and now they want to tell the people they love him for the sake of politics.

“That betrayal, humiliation and dent is the wound that never healed, which he tried to pretend all was well till death took him away, a vacuum have been created and the Ijaw nation will do everything to fill it”

The love Alamieyeseigha showed the people wasn’t reciprocated till he died, he stood for the course of the Ijaw people like we in the APC but our ideologies are different.

The party prayed God to grant the wife and family the courage to keep the family together and his legacies, adding that all Bayelsans ought to go down on their knees and thank God for the life of the bereaved though it was short lived.

According to the commissioner of Transport, Hon. Akpoebi Alamieyeseigha, who spoke on behalf of the family, said that the period was the most difficult period in the family, adding that the man everyone knew and called was no more.

He said God knows the best for his bereaved brother and nobody can bring him back again but all the family needs is the prayer of everybody.

Related Topics:Alamieyeseigha's worst enemies were his friendssays APC
Up Next

Nasiru Oki redeployed to Bayelsa as Commissioner of Police