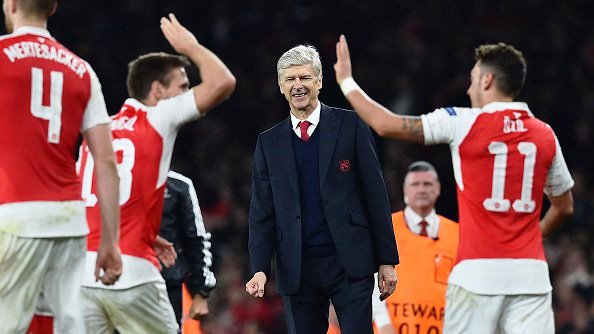 Arsenal took over at the Premier League summit on Saturday, while Chelsea manager Jose Mourinho was sent to the stands as his side crashed to defeat at West Ham United.

Buoyed by their mid-week win over Bayern Munich in the Champions League, Arsenal defeated Everton 2-1 to usurp previous leaders Manchester City, who visit Manchester United on Sunday in the Manchester derby.

But floundering champions Chelsea were left 11 points off the pace in 15th place after Mourinho, his assistant Silvino Louro and midfielder Nemanja Matic were dismissed in a 2-1 loss at Upton Park.

“When you win such a big game like they did on Tuesday (against Bayern), it shows a lot about the mentality of your team,” said Arsenal manager Arsene Wenger.

“That’s why I’m very proud of my team because they’ve shown the ability to refocus.

“We lost our first game of the season at the Emirates (against West Ham) and no one would say we would be top of the table after that.”

Since the start of the month Arsenal have been a team transformed, beating United and Watford 3-0 before brilliantly overcoming Bayern, and they have now won four successive games in the league.

They took control of the game at a rain-lashed Emirates Stadium with two headers in two first-half minutes by France internationals Olivier Giroud and Laurent Koscielny.

Giroud, preferred to Theo Walcott, flicked Mesut Ozil’s in-swinging cross past Tim Howard in the 36th minute before Koscielny stole in at the near post to convert a left-wing free-kick by Santi Cazorla.

Everton midfielder Ross Barkley replied before halftime with a shot that took a hefty deflection off Arsenal defender Gabriel.

After Giroud had hit the woodwork, Romelu Lukaku skimmed the bar with a header, but Everton could not find an equaliser and had Gareth Barry sent off in stoppage time for a second bookable offence.

Victory lifted Arsenal above West Ham after the east London club had provisionally climbed to second place by beating Chelsea, who have already lost five times in 10 league games.

Mourinho was banished from the touchline by referee Jon Moss at halftime after Mauro Zarate had drilled West Ham ahead from a 17th-minute corner and Matic had been sent off for two bookable offences.

Reports suggested he had tried to enter the match officials’ changing room.

Related Topics:Chelsea slums again as Arsenal go top
Up Next