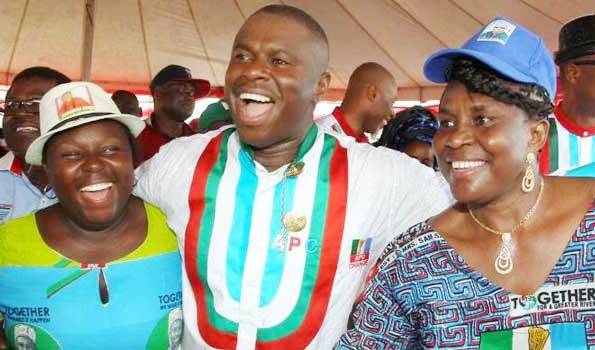 Following the ruling of the Governorship Election Petitions Tribunal for Rivers State, on Saturday, that nullified the election of Governor Nyesom Wike of Rivers State for non-compliance with the provisions of the Electoral Act, supporters of the All Progressive Congress (APC) took to the street to celebrate the decision of the court.

Mr. Dakuku Peterside, APC governorship candidate in Rivers State (middle), flanked by members of the party after the Tribunal ruling on Saturday

The Tribunal, sitting in Abuja, ordered the Independent National Electoral Commission (INEC) to conduct fresh governorship election in the state within 90 days.

The three-member tribunal, presided over by Justice Suleiman Ambursa, gave the orders in its judgement in a petition filed against the election of Wike by the All Progressives Congress (APC) and its candidate in the April 11 election in the state, Dr Dakuku Peterside.

Meanwhile, many members of the APC in Rivers State were seen carrying posters of their governorship candidate at the last elections, Dakuku Peterside, and singing solidarity songs and dancing at the party’s secretariat in Port Harcourt, the rivers state capital.

But the Peoples’ Democratic Party (PDP) in the state said that the merriment might be short lived.

In the judgement, which was read by Ambursa for more than two hours, the tribunal held that the petitioners successfully proved their case that the election was conducted in total disregard to electoral guidelines.

Specifically, Ambursa said that the process of accreditation for the election was compromised with the use of incident forms rather than adherence to card reader.

“It is the view of the tribunal that the election was held contrary to guidelines.

“While we agree with the second respondent’s (Wike) position that card reader was just introduced, but the usage of the card reader is to complement voter register.

“The election was in total disregard to guidelines, the issue of accreditation in election cannot be compromised.

“Even, some of the witnesses of the respondents said they were not aware of the use of card reader for the election,’’ he said.

Ambursa said the tribunal also hinged its decision to annul the election on contradictory position by the second and third respondents (Wike and PDP).

According to him, some figures given by the witnesses of Wike contradicted the figures presented in the documents tendered by PDP while defending the case.

Ambursa also said that the tribunal was not impressed with the way the witnesses of the respondents presented themselves during cross examination by the petitioners.

Ambursa said some of the witnesses of the respondents, who had written their evidence and tendered them before the tribunal, claimed that they could not read when they were confronted with INEC results sheets during cross examination.

“We are in agreement with the petitioners that the evidences presented by the respondents were unreliable.

“The respondents on their part were unable to defend the allegations in the petition.

“The petitioners have proved their case as required by the law that the second respondent was not validly elected,’’ he said.

Meanwhile, counsel to the PDP, Chris Uche (SAN), has said that the decision of the tribunal was “unacceptable’’ and it would lodge an appeal.

On his part, Mr Sikiru Oke, who spoke on behalf of Chief Akinlolu Olujinmi (SAN), the lead counsel to APC and Peterside, said the tribunal had done justice by its decision.

Related Topics:Jubilations as Tribunal sacks Rivers GovernorNyesom Wike
Up Next