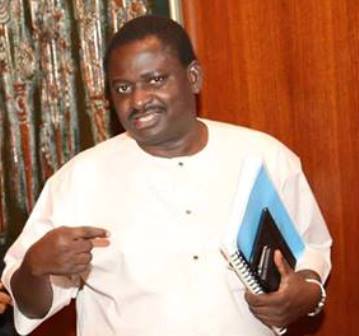 Femi Adesina, Special Adviser to President Mohammadu on Media and Publicity has described as falsehood, a report by an online news portal, Per Second News, that said President has dissociated himself from Abubakar Audu, APC guber candidate in Kogi State.

Adesina in a statement on his Facebook page said, “Per Second News quotes me as saying, ‘President Muhammadu Buhari has dissociated himself from Abubakar Audu,APC guber candidate in Kogi State’.

“I never did. It is falsehood.”

Buhari to Audu: ‘Remove my pictures from your campaign materials’

The Kogi APC governorship candidate Prince Abubakar Audu, is yet to get the rest he earnestly deserved since he won the party primaries. Per Second News gathered that President Muhammadu Buhari has called for the removal of his pictures from all the campaign and promotional materials of the APC Kogi Governorship candidate.

According to a statement from the Presidency “His Excellency, Muhammadu Buhari has therefore ordered the removal of his pictures from the campaign materials of Prince Audu Abubakar and has directed the Director General Prince Audu Abubakar Campaign Organization to comply with this directive effective immediately,” the statement stated.

It was not clear why the president gave such directive but it would not be unconnected to the recent meeting with the APC stakeholders where the president backed out of the National campaign committee of Prince Abubakar Audu based on the integrity of the candidate and his unconvinced answer to the allegation of 11 billion naira by the EFCC.

According to Mr Femi Adesina, “The attention of the president has been drawn to the pictures and news flying around that President Muhammadu Buhari has adopted the candidature of Prince Audu Abubakar. Let it be known that the President has not endorsed the candidature of both the APC Bayelsa and Kogi candidates; he is yet to do the official endorsement pending when all the conditions of His Excellency are met.

It would be recalled that Vice President Yemi Osibanjo was said to head the National Campaign Committee for the coming Kogi governorship election for APC but he opted out at the last minute of the inauguration of the committee in Abuja.

A source close to the presidency confirmed that the Vice President opted out on the directive of Mr. President.

“The Presidency wants to distance itself from the candidature of Prince Audu Abubakar for the mean time till they are fully convinced” said Alhaji Jibrin Mahmud, a source close to the presidency.

Per Second News also learnt that Audu cannot also be too sure that his party members who contested the party primaries with him will not be spoilers as most losers do during elections in the country. For example, before the primaries, no fewer than 10 of the aspirants accused Prince Audu of cloning permanent voters’ cards to hand over to his loyalists for proxy vote. While it is possible that members of the group were overwhelmed by the former governor’s charisma, it does not rule out enemy action from some of them just as others may have since accepted the result of the primaries in good faith.

Nigeria lost a nationalist as Onosode is buried, Okowa says