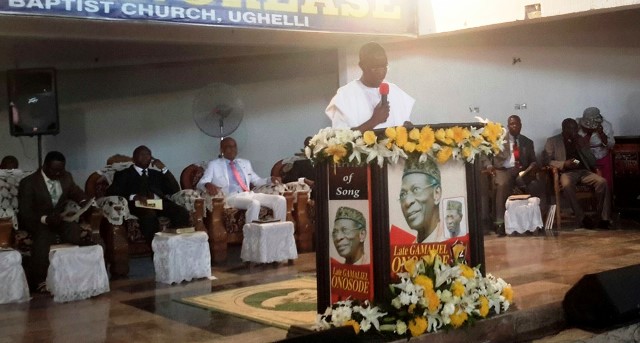 The remains of boardroom guru and nationalist, Deacon Gamaliel Onosode, has been interred at his hometown Ughelli with Governor Ifeanyi Okowa of Delta State describing him as a man of substance, humility and dedicated servant of God.

Funeral service of the late icon at the First Baptist Church, Ughelli was attended by the cream of the society including former Secretary-General of Commonwealth of Nations, Chief Emeka Anyaoku. Deacon Onosode died at the age of 82.

Governor Okowa who attended the burial ceremony accompanied by top officials of the Delta State government stated in a brief tribute that the deceased was a model of simplicity who used “his God-giving wealth to propagate the gospel.”

“Mr Integrity as he was fondly called was a stickler for time, meticulous in his approach to issues and committed to result delivery,” Governor Okowa said, adding that Nigeria lost a foremost nationalist and conscience of the nation in the person of Deacon Gamaliel.

Also at the occasion, Chief Anyaoku described the deceased as “a symbol of integrity in the Boardroom.”

In a sermon at the church service which was laced with tributes and gospels rendition, Dr Samuel Ayokunle, President, Nigerian Baptist Convention, said the late Onosode was a man who had opportunities and handled such with high sense of responsibilities.

He challenged President Mohamnadu Buhari and other political office holders to display high sense of responsibilities in handling affairs of the nation, asserting that the nation’s airports and roads should urgently be fixed.

Governor Okowa was amongst those who witnessed the internment of the late Onosode.