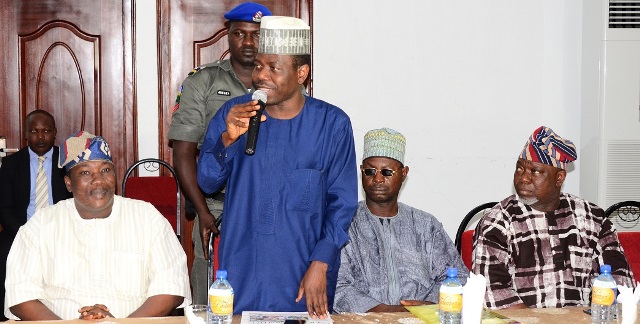 Speakers of the Osun House of Assembly, Honourable Najeem Salaam and his Kwara State counterpart, Amadu Alli have appealed to President Muhammadu Buhari to sign the amendment of the law seeking autonomy for State Houses of Assembly.

They said it is the only way the legislature at the state level can perform their legislative duties effectively and without fear or favour.

The duo spoke on Wednesday at the end of a three-day summit for members of Kwara Assembly, held in Ede, Osun State.

Salaam said leaving the legislative arm of government at the mercy of the executive negates the principles of separations of powers and had always hindered lawmaking businesses at various state assemblies.

Describing separation of power as the cornerstone of democratic system, Mr. Salam said the amendment being sought promises the protection of rights and liberty of the citizens.

‘Living at the mercy of the executives for the welfare of its members and operations is not in the best interest of democracy, autonomy at long and short run is a win-win situation’.

Salaam also clamored for bottom up approach in the formation and implementation of government policy especially budget preparation stressing that lawmakers being elective representatives knows where the shoe pinches most in their respective constituency.

Also, the Speaker, Kwara State House of Assembly, Amadu Alli said the legislature cannot function efficiently without being autonomous, saying, it is in itself a contradiction for a supposedly independent arm of government to be clamoring for autonomy.

He said, autonomy will prevent the tyranny of any arm of government as the legislature would be fully disposed to deliver on its mandate.

“Autonomy will prevent justice from becoming arbitrary and capricious,

Without autonomy, there will be apprehension, even abuse cannot be ruled out”.

Ali said efforts were being made at the level of Conference of Speakers to ensure that states houses of assembly secured autonomy to the legislative arm of government.

Related Topics:KwaraOsun Speakers call for Legislative Autonomy
Up Next

AU to honour Tinubu at AFRIMA 2015