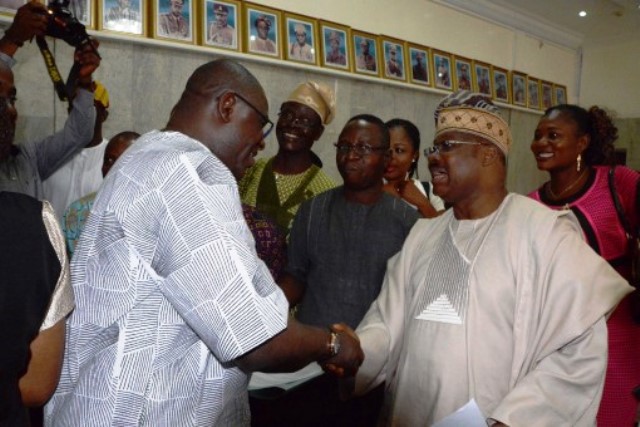 Senator Abiola Ajimobi, Oyo State Governor, says he owes his victory at the polls to God and the good people of the state who gave the mandate to him freely.

Governor Abiola Ajimobi, in handshake with Speaker Oyo-State House of Assembly who led other honourables of the House to congratulate the governor over victory at the Tribunal on Tuesday in Ibadan

Reacting shortly after the election tribunal judgment which upheld his election on Tuesday, the Governor said that the verdict had laid to rest all the innuendos, evil machinations and falsehood being spread across the state and beyond by his opponents after his victory.

Governor Ajimobi said, “I thank the good people of Oyo State for the confidence reposed in me by voting for me enmasse for the second term in spite of innuendos, evil machinations and falsehood by our opponents.

“I am of immense gratitude to God for this victory and for making it possible for me to break the second term jinx.

“Today’s judgment has strengthened my belief in the judiciary as the bastion of our fragile democracy and the bulwark of good governance.

“The judgment is not only a victory for my party, the All Progressives Congress (APC), but also a victory for democracy and the rule of law.

“The road has not been smooth and it has been long, but events have been encouraging and it goes to show that our faith has not been misplaced,” he said.

Governor Ajimobi, who pledged not to betray the confidence reposed in him by the people of the state, said that he remained the “coordinating servant” of those seeking the progress and prosperity of the state.

While thanking the tribunal for doing a thorough job, he said that the thoroughness and industry put into the writing and delivery of the judgment was highly noteworthy after painstakingly poring through stacks of documents.

He also thanked the opposition for bringing out the best in him, saying if they had not taken him to court, all doubts might not have been erased about the credibility of the election that earned him a second term.

Addressing his opponents, Ajimobi enthused that “They should rather join hands with us to move Oyo State forward.

“I am taking this opportunity to call on my brother, Senator Ladoja, who contested the election with me, that we should move away from innuendos.

” We must stop seeing Oyo State as a big village. We must move away from pedestrian politics and treat the state as a force to reckon with in the comity of civilized states,” he stressed.

According to him, every citizen of the state, including his opponents, should be in the vanguard of taking Oyo State to higher pedestal, because the state is bigger than anybody.

Meanwhile, the candidate of the Accord party at the election, Rashidi Ladoja, who was the petitioner said that Tuesday’s judgment was being studied, and after this a position would be taken.

According to a statement signed by a media aide to the former governor, Mr Lanre Latinwo, Ladoja called on all Accord Party supporters to remain calm and law abiding as the next line of action would be made known soon.

The Election Petition Tribunal sitting in Oyo State on Tuesday upheld the election of Governor Abiola Ajimobi in the April 11 polls.

The judgment was delivered by the Justice Mohammed Aliyu Mayaki-led election Petition Tribunal, amidst tight security around the premises of the sitting.

Related Topics:calls for end to pedestrian politicsOyo: Ajimobi celebrates victory at Tribunal
Up Next

Chelsea will be back, Lampard backs Mourinho