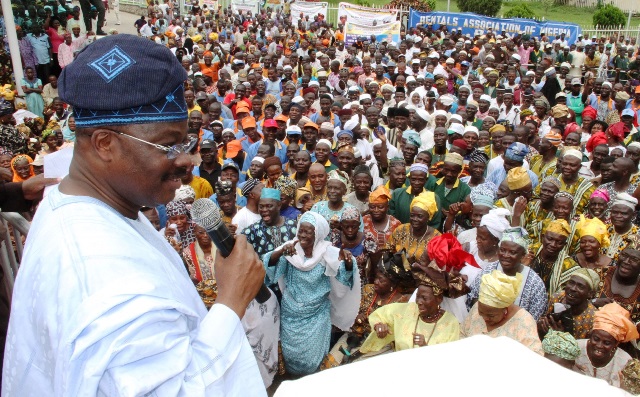 Oyo State Governor, Senator Abiola Ajimobi, on Wednesday said that no amount of intrigues, blackmail and manipulations by the opposition Accord Party and its gubernatorial candidate in the last general elections, Senator Rashidi Ladoja, could unseat him as governor.

Governor of Oyo State, Senator Abiola Ajimobi, addressing a mammoth crowd of coalition of traders, artisans, religious bodies, professional groups, market men and women who thronged his office to celebrate with him upon his victory at the Governorship Election Petition Tribunal… on Wednesday

He stated this while addressing hundreds of artisans, traders, market men and women, as well as religious bodies who thronged the Governor’s Office to congratulate him on his victory at the election petitions tribunal on Tuesday.

In apparent reference to Ladoja’s decision to appeal against the tribunal’s judgment, the governor said his mandate was of God no amount of blackmail could change the will of God and the mandate freely given by the people of the state.

Ajimobi said, “When I heard that my egbon, Senator Rashidi Ladoja, said that he was not satisfied with the tribunal judgment and that he vowed to head for the Court of Appeal, I said he (Ladoja) should go to wherever he wants to go.

“But I want to assure you all and the good people of Oyo State that thousands of Accord Party and its candidate, Senator Rashidi Ladoja, cannot unseat me. This mandate is of God and popularly given to me by the good people of this state.

“We must all work together to develop Oyo State. We must never allow enemies of this state to thrive again. We give glory to God that he has taken care of all the troublers of our state. So what should be our concern now is how to ensure that this state is taken to greater height.’’

While thanking the people of the state for their unflinching support for his administration, especially before, during and after he succeeded in breaking the second term jinx, he promised to spare no effort to ensure all-round development of the state.

Governor Ajimobi pledged that his administration would continue to implement policies and programmes that would promote the well-being of artisans, traders and all professional associations as a deliberate step to boost small and medium scale businesses.

The Deputy State Chairman of NATA, Alhaji Rahman Oyediran and Alhaja Motilade Adedeji, President of Pepper Sellers Association, who spoke on behalf of others, thanked God for the victory and pledged their unalloyed support for the Ajimobi’s administration.

Related Topics:Ajimobi to LadojaYou’ll fail again if you appeal
Up Next