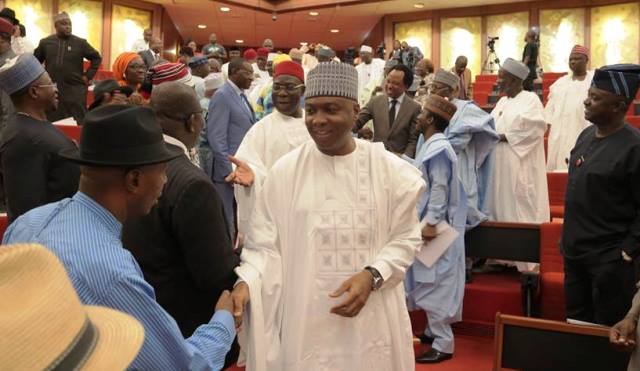 The power of the majority played out in the Senate on Thursday as the All Progressives Congress (APC) Senators vote to confirm the former governor of Rivers State, Rotimi Chibuike Amaechi as a minister along with 17 other ministerial nominees.

The Peoples’ Democratic Party members in the Senate staged a walk out when it was apparent that they would be overwhelmed during the voting session, siting the case of corruption against Amaechi as reason they refrained from endorsing him.

The Senate, in addition cleared other ministerial nominees who had been screened for appointment.

Thursday’s sitting of the Senate was characterized by dramas amid intrigues at the instance both the APC and the PDP to push their different positions on Amaechi.

Indication that Amaechi was not going to have it easy had emerged before the day’s plenary commenced when the PDP Senators held an emergency meeting to take a stand on the former governor during the process of confirmation of nominees.

The PDP Senators after the meeting went straight to the chamber with a resolve not to vote in favour of Amaechi, even despite pleas from Senators who were favourably disposed to him.

With combined efforts, Senate Deputy President, Ike Ekweremadu, Danjuma Goje and others joined in appealing to the PDP Senators to temper their anger against Amaechi, although their please fell on deaf ears as the PDP stood their ground to heckle the process of Amaechi’s clearance.

The Senate after clearing the INEC Commissioners and the new Chairman immediately after they were screened dissolved into an executive session with intent to harmonise position on the confirmation of the last batch of the nominees.

The Plenary had hardly resumed when Minority Leader, Godswill Obot Akpabio who spearheaded the fight against Amaechi on behalf of PDP Senators raised a point of order, siting order 43, while insisting that the Report of a petition pending against Amaechi should be tabled and debated before he could be confirmed.

A counter motion moved by the Senate Leader to seek an express confirmation of Amaechi sparked some forms of protests from PDP members who said the Report on petition against Amaechi should be tabled and debated before any other business of the Senate.

On that note, the Senate President, Bukola Saraki called the Chairman of Ethics, Privileges and Public Petition Committee, Senator Samuel Anyanwu to present the Report for debate.

Reading the Committee’s Recommendation, Anyanwu said, “Following the discovery that the matter before the Senate is actually before a competent court of law, the Committee, accordingly recommends as follows;

“That since the ministerial nominee had gone to court of Appeal, to challenge the content of the petition and the white paper of the Judicial Commission of Inquiry, the Senate is unable to recommend the consideration of his (Amaechi’s) confirmation”

A PDP member, Senator Thomson Sekibo after being recognized by the Senate President said what the Ethics and Privileges Committee recommended was that Amaechi’s clearance should be suspended since the matter on him is pending still before the court.

Sekibo said the allegation of corruption against Amaechi was weighty, bothering on mismanagement of the resources of Rivers state and sales of public property in his state during his tenure as governor.

He referred to section 41 Rule 7 of the Standing Rule of the Senate to state that the Senate is not liable to receive any petition on a matter pending before the Court.

Omoworare, however seconded a motion moved earlier by Ndume that Amaechi and others be cleared, contended that the Senate, going by the rules should not have received the petition in the first instance on the basis that it was still in court.

Trouble started when the Deputy Minority Whip, Biodun Olujime (Ekiti) decried attempt by the APC to shut out the PDP from the process of clearance of the Nominees, arguing that in any democracy, the minority should be allowed to have their say though the majority could have its way.

When Senator Akpabio rose to buttress the point made by Senator Olujimi, the Senate President did not recognize him, stating that another Senator, Barnabas Gemade had earlier been recognized to speak.

Akpabio then mobilised all the PDP senators to stage a walk out as they were jeered at by APC senators who urged them to leave the plenary as quickly as possible.

Senator Gemade who spoke next affirmed that the Senate had allowed the Minority to have its way and that since members of the opposition had made comments on the Report by the Ethics and Privileges Committee, the Majority should then have its way.

It was on that note that Gemade moved a motion urging the Senate to quash the Report by the Ethics, Privileges and Public Petition Committee on petition against Amaechi, an efforts which enabled the Senate President called for votes which ensured the clearance of Amaechi and other nominees.

Why we staged walk out on Amaechi – PDP Senate Caucus