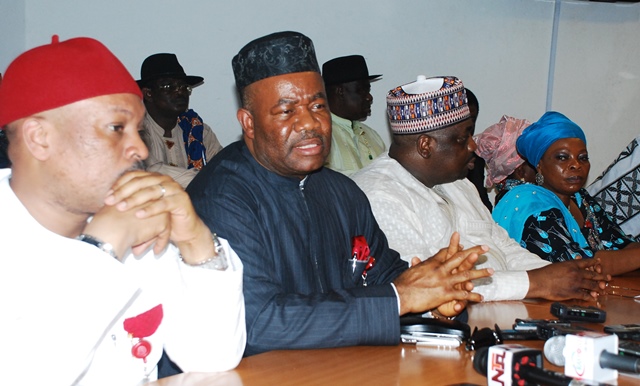 Peoples Democratic Party (PDP) caucus in the Senate has said notwithstanding staging a walk out against the clearance of Rotimi Amaechi for ministerial appointment, it would not withdraw its support for the Senate President, Bukola Saraki.

PDP Senators led by Senate Minority Leader, Senator Godswill Akpabio (2nd left) addressing the media after staging a walk out during the confirmation of ministerial nominees on Thursday

The PDP caucus while addressing the media on the issue after plenary said, it was not the support of its members alone that made Saraki to emerge as Senate President.

Senator Godswill Akpabio who addressed the media said since Saraki emerged unopposed to become the Senate President, the question of withdrawing support from him does not arise.

He explained that the PDP staged a walk out during the process of confirming Amaechi mainly because of the need to put it on recorded that members were not part of the illegality the Senate perpetrated to rail-road Amaechi’s passage.

Akpabio said the Senate should have refrained from clearing Amaechi on the basis of the recommendation by the Committee on Ethics, Privileges and Public Petition, which investigate the petition against the former governor.

Some members of the PDP caucus during plenary had argued that the plan by the Senate to clear Amaechi at all costs will continue to constitute a moral burden on the Senate and the government of President Muhammadu Buhari.

Related Topics:Why we staged walk out on Amaechi – PDP Senate Caucus
Up Next

New PH airport terminal to be commissioned in 2016, says Dunoma