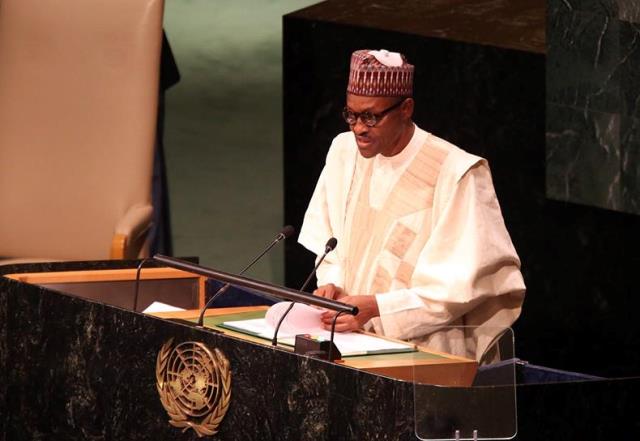 President Muhammadu Buhari has replied a statement by the opposition Peoples Democratic Party, PDP, that the president is ‘demarketing’ Nigeria.

The PDP, in a statement by its spokesperson, Olisa Metuh, on Sunday said Mr. Buhari was by his various statements making Nigeria unattractive to investors.

“it is worrisome that in the last six months, the President, instead of making efforts to harness resources and grow the economy, has rather continued to apply himself, perhaps unwittingly, to demarketing the nation and scaring away investors through negative labelling of Nigerians and unwarranted unhealthy portrayal of the nation’s economy,” Mr. Metuh said.

In its reaction, the president in a statement by his spokesperson, Femi Adesina, said Mr. Buhari will always tell Nigerians the truth.

Read the presidency’s statement below.

Our attention has been drawn to the latest statement by the PDP spokesman, Olisa Metuh, alleging that President Muhammadu Buhari is “demarketing Nigeria”.

We restate for the umpteenth time to Mr. Metuh and his ilk that their attempts to distract President Buhari from the job he has been elected to do will fail.

President Buhari will remain true to the virtues of honesty, integrity, sincerity, incorruptibility and plain-speaking which endeared him to Nigerians and made them prefer his leadership to that of a lying and deceptive PDP administration.

The President will not, in the guise of “marketing” the country, refrain from telling Nigerians and the world, the emerging truths about the abject state in which years of plundering by a PDP leadership has left the Nigerian treasury and economy.

President Buhari will not in the name of “marketing” or “attracting” investors, follow in the footsteps of the ousted PDP Administration and its discredited officials who shamelessly lied to Nigerians and the world about the buoyancy and vibrancy of an economy they had bled dry for personal gain, when it was very obvious to the discerning, that the Nigerian economy was headed for serious trouble.

It is most unfortunate that instead of showing some remorsefulness for the harm done to the nation by his party, and giving genuine support for President Buhari’s efforts to salvage and revamp the national economy, Mr. Metuh persists in a vain attempt to remain relevant on the national stage by unjustly denigrating the President who continues to strive with all his might to alleviate and reverse the harm done to the nation by PDP misrule and corruption.

Mr. Metuh’s antics are futile. President Buhari cannot be distracted by a broken record. If the PDP spokesman ever has serious matters to bring to our attention, we will be prepared to listen.

Related Topics:Buhari will always tell Nigerians the truth – Presidency
Up Next