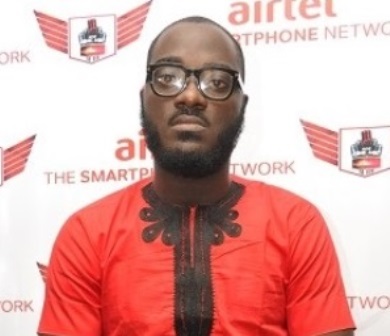 Ekundayo Samson Monja a.k.a L.A.S.E, one of the up-and-coming artistes discovered through the Airtel One Mic talent hunt Season 1 has said his target is to make the best of his career after the launch of Airtel One Mic Album. The Theatre & Performing Arts graduate from Ahmadu Bello University spoke on why he never wanted to take part in the Airtel One Mic competition and his plans.

Like the three other Airtel One Mic Stars, L.A.S.E emerged winner through a keenly contested competition held in his school. He later emerged winner of contest in the north region.

“I feel blessed and favoured to have participated eventually. I am deeply grateful to Airtel for this great opportunity. I appreciate Airtel Nigeria and encourage them to do more because there are many more talents out there. A lot of them are looking for opportunities like this and a platform to help them achieve their dreams,” he said.

Speaking on the One Mic Album, L.A.S.E said: “I have two songs in the album, the first one is titled ‘Tripping’ produced by DJ Clem and ‘I love My Baby’ featuring Patoranking produced by Masterkraft. Performing with A-list artistes is a big opportunity for me.”

L.A.S.E also spoke on what he likes and hobbies: “My best food is rice and fried stew. Apart from singing I write, direct and act. I have been doing this for a long time. I can say I received huge support from my parents towards my music ambition. I am the first of three kids of my parents. So, my siblings look up to me as a rising star, they are happy to see my videos on TV especially with other big stars in the entertainment industry.”

Concerning the Nigerian music industry, the young entertainer said: “The sector keeps improving day after day though there are lots of expectations from fans, music enthusiasts and other budding music talents. Personally, I look forward to American Grammy and other big entertainment awards in Nigeria and outside the country, and that means I just have to work really hard. When I started music I just prayed to God that people will appreciate it and love my style of music. The Airtel One Mic Album launch is the start of our career and we hope to make a success of it.”

‘My style of music differentiates me’