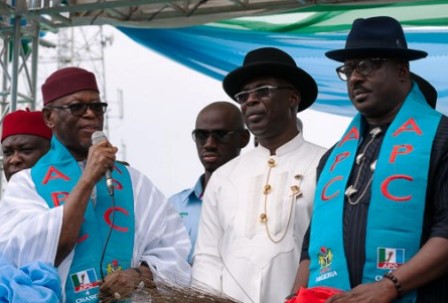 Signs that the governorship candidate of All Progressives Congress, APC, in Bayelsa State, Chief Timipre Sylva, is walking on a lonely path ahead of December 5 governorship election became glaring yesterday when six out of seven governors slated for the inauguration of his campaign council failed to turn up for the ceremony.

It will be recalled that Sylva’s emergence as the governorship candidate became controversial after the first primary election was marred by violence.

His closest rival in the election, Mr. Timi Alaibe, who was a member of the campaign council, was absent just as the APC deputy national publicity secretary and   Bayelsa indigene, Timi Frank, rejected his membership.

Senator Heineken Lokpobiri will serve as the Secretary of the council.

Giving reasons why he rejected his membership of the council, Frank said he was an aggrieved member of the APC, Bayelsa State chapter and would not accept his membership.

“I was earlier briefed about the Bayelsa campaign council that was inaugurated anyway by a text message that got into my phone. But, practically I refused to attend that programme because I felt I don’t hide my feelings anytime any day. I am an aggrieved member of the APC in Bayelsa State. As much as I remain aggrieved, I will continue to stand my ground. I will continue to stand on what I believe. I do not believe in what is happening as at today that was why purposely I refused to attend that function. So, how do you expect me to be part of his campaign team, I am not ready for that, I am ready to face my party”, he said.

He noted that the committee had a crack team that would deliver.

He said: “The work that this committee is going to embark upon will produce the first progressive governor of Bayelsa State. Let me thank all of you that have accepted to serve in this very challenging assignment. As you can see, it is a campaign council like no other. Our expectation is that all 22 APC governors are going to storm Bayelsa State. But what is important is that seven governors have volunteered to give up their time and energy to serve as members of the campaign council. That had never happened before. I think it underscores in very clear terms, the importance to which the whole party attaches to the Bayelsa election.

“The time is short, that we understand, but the circumstances and the situation are very upbeat and very promising for eventual victory at the election. Just like I was confident about the national election, I am confident of the Bayelsa election because we have a good product.

“We have a non-performing governor in Bayelsa State. Thirdly, even the governing party in Bayelsa State has crumbled because most of the significant people in that party are today with us canvassing for votes for a progressive governor. Lastly, we have a crack team as members of the campaign council and our job here today is to send them forth to undertake this challenging assignment. The mandate is simple, and that is, let Bayelsa State witness endless transformation to a meaningful change. Change must arrive in Bayelsa State. It is a state where we want to prove a point, where we need to prove a point. It is an election that we need to win to bring Bayelsa into the fold, into the movement, into the train of change in this nation.

“Let me make this clear. We are not working towards creating a one party nation. We are only saying today that the challenges facing this nation are so enormous that we need every man, woman and child on board so that the trajectory on which we are travelling should change dramatically. For that, we need all geopolitical zones as well as all the good people of this country to please come on board because the task at hand is enormous.”

Oyegun also insisted that the government in Bayelsa had failed to meet the needs of the people, saying that the state needed people like president Mohammadu Buhari to turn it around.

“We have a nation that is in every way gifted. Starting from our President, for the first time in the history of this nation, we have a man in charge who is accepted, acknowledged and known to be a man of his words,” he said.

Related Topics:3 other govsAlaibe shun inauguration of Sylva’s campaign councilAmbodeOkorochaShettima
Up Next