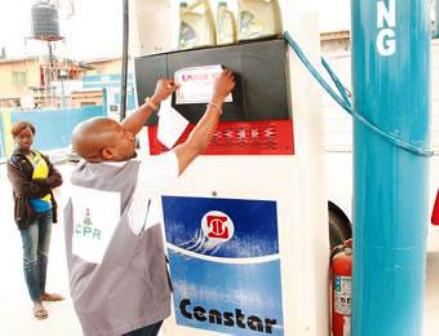 As part of its activities to check mate the excesses of Independent Marketers in Minna, Niger State capital, the Department of Petroleum of Resources (DPR)‎ on Friday said that the eight filling stations sealed up for offences ranging from price hike to lack of safety mechanism have paid the N100,000 fine each for not obeying the rules.

Engr. Abdullahi Isah Jankara, Niger State DPR Controller made the disclosure while fielding questions from journalists,observed that the people have been buying petrol products at black market rates everywhere, which is not supposed to be.

Jankara who sealing up eight patrol stations in Minna for various offences, maintained that it would no longer be business as usual for independent oil marketers in the state, hence they pay the fine of N100,00 each and must adhere to the rules or quit the business.

According to him,”Niger State have been at the receiving end for too long and it seems as if they are not part of the country,hence the right must be done. People have been buying petrol products at black market rates everywhere, which is not supposed to be

“Some filling stations in the State capital are not selling petroleum product at the government approved price while those who claim to be selling at the approved price have adjusted their pump.

“Most people still believe that they can do things in the old way in the distribution of fuel, all the independent marketers in the state does what they like but DPR will not allow it. If you are not ready to do business in line with the guidelines, leave and go into another business. The era of illegality is gone.”

He said Hajara Global, First El-Shabab, Muhabat Tunga, Garima, Unibros, AUG and Mubashar Investment were shut for selling at N110 per litre, while an NNPC retail affiliate was sealed for non-functional safety mechanism.

Jankara explained that the first seven stations were sealed up for price hike and the NNPC was closed because of safety mechanism issues.

“All the safety mechanisms at the NNPC station are not working. All the fire extinguishers are not functioning, I tried to fire and none responded”

He also noted that the stations were not only closed but ordered to pay a fine of N100, 000 each to serve as deterrent others.

“We don’t just close, if we close the penalty is N100, 000 and all of them have paid that amount into the government coffers.”